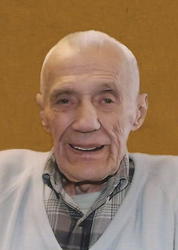 Mass of Christian Burial celebrating the life of William “Bill” Fellegy, age 90, of Holdingford, will be at 11:00 AM on Saturday, August 8, 2015 with a visitation at 9:00 AM prior to services at the Church of All Saints – St. Hedwig in Holdingford.  Father David Grundman will officiate and burial will take place in the parish cemetery following the service.  Bill passed away peacefully at Mother of Mercy Nursing home early Tuesday morning.

Bill was born on July 31, 1924 to William G. and Florence (Hiesick) Fellegy in Minneapolis.  He grew up with three siblings and graduated from Upsala High School.  He loved to play his guitar, played in the band “Lonesome Cowboys,” and sang at weddings, funerals, and dances.  Bill married Jeanette Kollodge in February of 1944, served in the US Army from 1945-1946, and returned home to help on the family farm.  Bill and Jeanette raised ten children in the Holdingford and Upsala areas.  He worked at “Our Own Hardware” as a repairman.  Bill and Jeanette bought the Easy Wash Laundromat in Holdingford in 1968, which they ran for many years.  Later, he worked as a custodian for Holdingford School District and received the “Outstanding Lay Employee of the Year” in 1979 for his work there.  Bill was a Mr.-Fix-It, who loved to lend a hand to anyone, regardless of their ability to pay him.  He was always willing and eager to help in any way.  Bill was an active member of St. Hedwig church, sang in the church choir for over 60 years, belonged to the St. Joseph’s Society, the Holdingford Legion, the Knights of Columbus, and was a graduate of the Dale Carnegie Course.

He is preceded in death by his wife Jeanette in 2013, his son Tom Fellegy, his parents William and Florence Fellegy, and his siblings Loraine (Ralph) Jolitz, and Bob (Barb) Fellegy.

The family would like to extend a heartfelt “thank you” to the nurses and staff at Mother of Mercy for their care for Bill over the past 2 years.

Arrangements are being made with the Miller-Carlin Funeral Home of Holdingford.

Mass of Christian Burial celebrating the life of William Bill Fellegy, age 90, of Holdingford, will be at 11:00 AM on Saturday, August 8, 2015. Father David Grundman will officiate and burial will take place in the parish cemetery following the service.

Bill and his beautiful voice sang for Don’s funeral.  I will always remember him for doing that.  He was a wonderful person and will be missed.

I grew up knowing Bill as he was a friend of our family.  He was always so kind to me-he even sent me cards in his beautiful handwriting when I was away at college and when my children were born.  My condolences and prayers for his family – he was a wonderful person.

I grew up in Holdingford but have not lived there for more than 50 years.  Bill was always one of those bigger than life people who had an influence on all he met. . .even when we were kids.  He shall be missed.