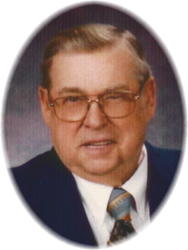 The Mass of Christian Burial, celebrating the life of Walter H. Groetsch, age 85, of Avon, will be 11:00 AM on Monday, March 7, 2016 at the Seven Dolors Catholic Church in Albany.  Fr. Cletus Connors, OSB will officiate and entombment will be in the parish cemetery.  Walter died Thursday afternoon with his children at his side at the Quiet Oaks Hospice House in St. Augusta.  There will be a visitation from 4-8:00 PM on Sunday, March 6, and again after 10:00 AM Monday in the Seven Dolors Gathering Space.  Seven Dolors parish prayers will be at 4:00 PM Sunday evening.  Arrangements are being made by the Miller-Carlin Funeral Home of Albany.

Walter was born on December 15, 1930 in Albany to Anton “Tony” and Susan (Kammers) Groetsch.  He married Clare McGee March 28, 1949.  Walter was in the US Navy from 1948-1950.  He worked for American Bakeries for 26 years as a General Production Manager and then, from 1972-1984, he was with International Baker Services as an Executive Vice President.  Afterwards, he owned his own business in Greenwood, IN before retiring to Avon.  Over the years, the family lived in New Orleans, LA, Atlanta, GA, Rocky Mount, NC, Saint Paul, MN, Hanover Park, IL, South Bend, IN, and Greenwood, IN.  Walter loved to fish, hunt with this nephews and friends, bar-b-cue, and spend time with his family.  Among other things, Walter is proudly remembered for the excellent work ethic he instilled in all generations of his family.  He was a member of Seven Dolors Catholic Church, Albany.

Walter was preceded in death by his wife Clare in 2011, his daughter Dolleen Hvarre, his parents Tony and Susan Groetsch, his brothers and sisters Lucille Hondl, Leander, Wilford, Anthony, Alfred, Elmer, Clarence, Mary-Catherine Groetsch, and infant Rita, his grandsons Todd Gerads and Dana Johansen, and his great-granddaughter Cheyenne Pundsack.

There will be a visitation from 4-8:00 PM on Sunday, March 6, and again after 10:00 AM Monday in the Seven Dolors Gathering Space. Seven Dolors parish prayers will be at 4:00 PM Sunday evening.