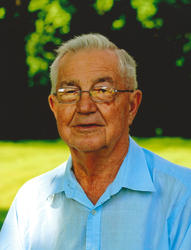 The mass of Christian burial celebrating the life of Tillman “Jim” Knapp, age 91 of Albany, will be 11:00 AM, Thursday, September 21 at the Church of All Saints, St. Hedwig in Holdingford.  Burial will be in the parish cemetery.  Tillman died Saturday at the Mother of Mercy Campus of Care in Albany.  There will be a visitation from 4-8:00 PM Wednesday at the Miller-Carlin Funeral Home in Holdingford and again after 10:00 Thursday at the church.  St. Hedwig parish prayers will be 4:00 PM Wednesday followed by the Knights of Columbus at 7:00 PM at the funeral home in Holdingford.

Tillman was born August 26, 1926 in Albany to Peter and Amalia (Hondl) Knapp.  He married Genevieve “Jenny” Reiter on June 6, 1950 in St. Boniface Church in Cold Spring.   Together, they raised 6 children while living in various Minnesota and South Dakota towns.  He farmed between 1952 and 1957.  He worked for the Railroad for a short time and also owned a hardware store for 4 years before joining Cold Spring Granite.  His job at the Cold Spring Granite Company caused him and his family to make several moves before he finally settled near Holdingford where he farmed from 1972 until 1990.  After retiring from farming he moved into Holdingford, he was a substitute bus driver for the Holdingford schools for a few years and then he worked at the Albany Hardware store for 14 years.    He was a member of the Church of All Saints, St. Hedwig and the Knights of Columbus.

He is preceded in death by his parents, his wife, Jenny in 2015, his brother, John Knapp and sisters, Mary Ann Knapp and Dorothy Landwehr.

The family would like to give a special thanks to the staff of the Mother of Mercy Campus of Care and the St. Croix Hospice.  A very special thank you to Sandy Olson and Karen Larsen for their kindness, special treats and continued visits to Tillman while at Mother of Mercy.

The mass of Christian burial celebrating the life of Tillman Jim Knapp, age 91 of Albany, will be 11:00 AM, Thursday, September 21 at the Church of All Saints, St. Hedwig in Holdingford. Burial will be in the parish cemetery.

Thankyou for the wonderful memories that you gave to me and my family at your farm and your visit to Maryland with your lovely wife – Aunt Jenny. You were always so kind to me. I care very deeply for my cousins in Minnesota and pray for them in their grief. – I love you Uncle Jim