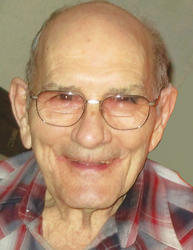 The Mass of Christian Burial, celebrating the life of Sigmund “Sig” Nemeth, age 92 of Sauk Rapids, will be 12:00 PM, Friday, December 16 at Mary of the Immaculate Conception Catholic Church in Rockville.  Fr. Ron Weyrens will officiate and burial will be in Assumption Cemetery, St. Cloud.  There will be a visitation after 10:30 AM, Friday at the church in Rockville.  Arrangements are being made by the Miller-Carlin Funeral Homes, St. Cloud.

Sig was born February 10, 1924 in Elk River to Sigmund and Anna (Rotz) Nemeth.  He married Lorraine Zahler on May 23, 1944.  The couple lived in Elk River until 1961 and then moved to Sauk Rapids.  In 1972 they moved to Pleasant Lake.  Lorraine died in July of 2005.  Sig worked as an electrician and then he became a State Electrical Inspector in 1961 and retired in 1989.  He was a member of the International Association of Electrical Inspectors.

after 10:30 AM on Friday, December 16at Mary of the Immaculate Conception Church in Rockville.

12:00 PM on Friday, December 16 at Mary of the Immaculate Conception Catholic Church in Rockville.

Please accept our deepest sympathy for the loss of your beloved father, Sig.  Our thoughts and prayers are with all of you at this sad time.  May he Rest in Peace with our lord and savior.

We are sorry to hear about Sig.  We just got home from our oldest sons grad. from college at Bozeman, so this is a little late.  We would have liked to have made it to the funeral, even though it is a long way, but we are planning a trip to Minn.  I remember the hunting trips that Sig took the boys on when I first met them all at our ranch years ago.  He and Darrell came out when we built our shop and wired it.  I have fond memories of the trips they made here.  They also wired our calving shed and machine shed.  We would have liked to have been able to see all of you again.

So sorry for your loss.  What a lot of memories.

I remember Sig as our neighbor way back in the 60’s.  He would come to our house with cigar in hand to bring smelt for our family that we ate for days and days!