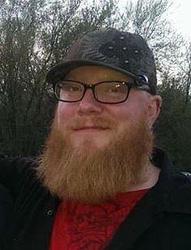 A Memorial Service celebrating the life of Sean Jolly, age 33, of Sartell, will be at 6:00 PM on Thursday, July 2, 2015 at Miller-Carlin Funeral Home in Albany.  Sean died unexpectedly late Saturday evening with his brother by his side of a probable heart condition.  There will be a visitation one hour prior to the service.  Arrangements are being made with Miller-Carlin Funeral Home, Albany.

Sean was born on October 12, 1981 to Don Jolly and Martha (Gordhamer) Breth in Colorado Springs, CO.  He grew up with his brother Cory and, after obtaining his GED, went on to earn his Commercial Driver’s License.  Sean worked as a truck driver and had just began working for Rock-On-Trucking, after approximately a year driving for MBI.  He was an outdoorsy guy who enjoyed fishing and hunting.  He was intelligent, witty, and humorous, the “Jolly Joker,” and quietly charismatic.  He enjoyed gaming and spending time with his close friends and family.  Sean was supportive of his loved ones.  He was a loving and kind man with a passionate soul.  Sean was unapologetic for who he was and his style was uniquely his own.  He was a talented artist and a music lover who was especially drawn to music he could identify with.  Sean was also very intense and wore his heart on his sleeve: when he felt something – he felt it intensely.  He liked paintball and playing disc golf, especially with his son Domanic.  Sean was a very spiritual man and was recently re-baptized in the The Waters Church.

Sean is survived by his mother Martha (Mike Vos) Breth, Holdingford, his son Domanic Jolly, Mound; his brother Cory (Ashli) Jolly, Holdingford; his aunts Becky Jolly, AR; Chrissy Pederson, Avon; his nephew Doniven Jolly, Holdingford; as well as many other family by birth, brothers by choice, and friends.  He will be dearly missed by all who knew him.

He is preceded in death by his father Don Jolly, his uncle Mike Pederson, his step-father David Breth, all of his grandparents, and some close friends.

A Memorial Service celebrating the life of Sean Jolly, age 33, of Sartell, will be at 6:00 PM on Thursday, July2, 2015 at Miller-Carlin Funeral Home in Albany.

Martha, our hearts are aching for you and family.  We have experienced the deep saddness  and lingering grief with such a loss.  We pray that  God will shower you with strength, comfort and peace.

My heart is still breaking. I can barely see to type through the tears.  I wasn’t supposed to lose any more family.  I need the rest of you to take better care of yourselves, please.  Put the frickin’ cigarettes down!  Take up public nose picking, what ever.  I’ve lost 1/2 of all I had left of my brother. Cory, it’s up to watch them all now, please. And Marty (that’s all I know you as), I can’t begin to imagine what you’re going through.  My heart goes out to you and I’m praying for you all.  I wish I could be there. You have all my love.