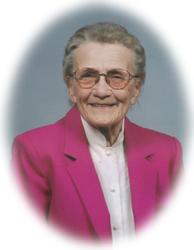 Funeral services celebrating the life of Rose Helen Christen, age 90, of Albany will be Friday, July
30 2010 at 11:00 AM at Our Saviors Lutheran Church in Albany. Pastor Bradley Pearson will
officiate and burial will take place in the parish cemetery following the service.  Friends may call
Thursday, July 29 from 5 to 8 PM at Our Saviors Lutheran Church in Albany, and again
from 10 AM until the service at the church on Friday.  Rose passed away Wednesday morning
surrounded by family at the Mother of Mercy Nursing Home in Albany.  Arrangements are being
made with the Miller-Carlin Brenny Funeral Home in Albany.Rose was born December 31, 1919 to Rose (Baggenstoss) and Paul Klein in Albany.  She married
Harry Herman Christen on June 29, 1939 at the Ebenezer Evangelical Lutheran Church in Albany.
The couple farmed together for many years.  She lived in the rural Albany area her entire life.
Rose was a member of Our Saviors Lutheran Church in Albany MN where she was a member of
Women’s Bible Study and also actively tied quilts for many charitable organizations.Rose is survived by her brothers and sisters Verna Koehn, Albany; Arlene Landowski, Albany;
Ervin (Ruth) Klein, Albany; Ardell Rustad, Albany; Doris (Ted) Koehn, Grey Eagle; Bev
(Donald) Litchy, Holdingford; Janet (Lester) Cigelske, Hewitt; Carol (Jerry) Rodenwald, Albany;
Sharon (Loren) Lehner, Albany; Erma Henry, Melrose.She is preceded in death by her husband Harry Christen who passed away September 17, 1992.
Rose is also preceded in death by her brothers and sisters Marvin Klein, Lloyd Klein, Jerry Klein,
Hildegard Henry, Bernice Koehn, Amanda Wren, Alvin Klein, and Earl Klein.  She is also
preceded by many beloved pets from the farm especially Whitey and Taffy.

Friends may call Thursday, July 29 from 5 to 8 PM at Our Saviors Lutheran Church in Albany, and again from 10 AM until the service at the church on Friday.

Memorials preferred in lieu of gifts

Aunt Rose and my Mom Anna had many good times together. the memories last a life time.