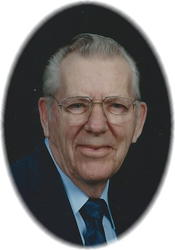 Mass of Christian burial celebrating the life of Romuald “Romie” Joseph Palmersheim, age 89 of St. Stephen will take place at 11AM Thursday, May 8, 2014 at St. Stephen Catholic Church in St. Stephen, MN.  Father Robert Harren will officiate and burial will take place in the parish cemetery following the mass.  Romie died at the St. Cloud Hospital Sunday night.  There will be a visitation from 4-8:30PM Wednesday, May 7th and again from 10-11AM Thursday before the mass at the St. Stephen parish hall located near the church.  Arrangements are being made with the Miller-Carlin Funeral Home in St. Cloud.Romie was born September 4, 1924 in Lake Henry, MN to Henry and Theresa (Wicker) Palmersheim.  He graduated high school and served in the US Navy.  After his time in the service, he married Delphine Vouk on October 24, 1956 in St. Stephen.  He lived in the St. Stephen area nearly his entire life where he and his wife raised their six children.  Romie was a mill-worker for the St. Regis/Champion Paper Company which he worked at for thirty years.   He was a proud member of the United Paperworkers International Local 274.  Besides work, Romie had many hobbies including fishing, wood-working, bird-watching, playing cards, reading, and crossword puzzles.  What he loved most in life though, was his family.  He was a member of the St. Stephen Legion Post 221 where he served as Treasurer for many years, and was also an active member of the St. Stephen Catholic Church.Romie is survived by his five children Diane Palmersheim, Minnetonka; Marie Palmersheim, Waite Park; Joe Palmersheim, St. Stephen; Dan (Judy) Palmersheim, St. Joseph; Janet (Bill) Van Koevering, Sartell; his six grandchildren; and his siblings Norine Blenkush, St. Stephen; Maurice (Rita) Palmersheim, St. Joseph; and Lillian (Delvin) Dullinger, St. Stephen.He is preceded in death by his parents Henry and Theresa Palmersheim, his wife Delphine who passed in August of 2011, his son Kenneth Palmersheim, and his brothers Cyril, Adrian, and Victor Palmersheim.

There will be a visitation from 4-8:30PM Wednesday, May 7th and again from 10-11AM Thursday before the mass.

Diane, my thoughts are with you and your family during this difficult time. Take care of yourself and each other.
With caring thoughts, Ellen