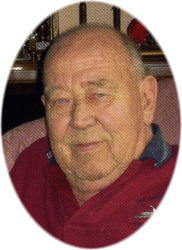 Services celebrating the life of Richard Welchert, 81, of Waite Park will be 10:00 AM on Friday, October 19, 2012 at the Miller-Carlin Funeral Home in Saint Cloud.  Father Matthew Crane will officiate and innichment  will be at Fort Snelling at a later date.  Arrangements are being made with the Miller-Carlin Funeral Home in Saint Cloud.Richard was born in Crofton, NE on April 5, 1931 to Joseph and Agatha (Asbre) Welchert.  He grew up with his five siblings in Crofton and left after high school to join the military in 1952.  Richard served in the Army during the Korean War and then, in the early 1970s, moved to Saint Cloud to raise his family.  He spent 31 years at Champion International Paper as a Production Manager until his retirement in 1981.  Richard enjoyed spending time with his grandsons, traveling, playing cards, fishing and pheasant hunting.  He was a member of the American Legion, the Elks, and the St. Cloud Eagles.  Richard was also an active member of his catholic community, most recently at the Church of the Holy Spirit in Saint Cloud.Richard is survived by his children Patricia (Dutch) Koop, Minneapolis; Paul (Annette) Welchert, Avon; and Rebecca (Harvey) Church, Terre Haute, IN; his seven grandsons; and his one great-grandson.He was preceded by his son Joseph M. Welchert in 1975; his brothers Linus Welchert, Martin Welchert, and Robert Welchert; and his sisters Agnes Welchert, and Catherine Schultz.

Mass of Christian Burial Celebrating the life of Richard Welchert will be 10AM Friday, October 19th 2012 at the Miller-Carlin Funeral Chapel in St Cloud MN. Burial will take place atFort Snelling National Cemetery in Minneapolis at a later date. There will be a time for sharing after the service.

The last of Uncle Joe’s children. May God have mercy on him.