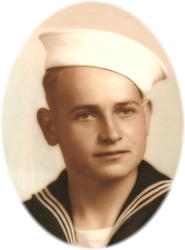 Mass of Christian burial celebrating the life of Richard Roman Hetman, age 82, of Holdingford will be Friday, August 6, 2010 at 11:30 AM at Our Lady of Mount Carmel Catholic Church in Opole.  Father Mark Stang will officiate, and burial will take place in the parish cemetery following the service.  Friends may call from 10:30 AM until the time of the service Friday morning at the church in Opole.  Richard passed away Monday morning at the VA Medical Center in Saint Cloud.  Arrangements are being made with the Miller-Carlin Brenny Funeral Home in Holdingford.Richard was born on January 2, 1928 to Mary (Ehnringer) and Ignatius Hetman in Brockway Township.  He attended high school in Holdingford and enlisted in the Navy in 1945 and served until 1947.  After his time in the service he moved to the cities where he worked at his brother Frank’s window company, DeVAC Inc.  Richard then moved to the farm in Opole where he lived until he moved to Riverbirch in Holdingford in 2007.  He was a member of the Holdingford VFW and Our Lady of Mount Carmel Church in Opole.Richard was the youngest of 9 and is survived by his sisters Angeline (Rodger) Bartlett, Golden Valley; Betty Frakes, Plymouth; his sisters-in-law Ruth Hetman, Golden Valley; and Tillie Hetman, Staples; and many nieces and nephews.He is preceded in death by his brothers and sisters Joseph Hetman, Agnes “Peggy” Green, Rose Sularz, John Hetman, Frank Hetman, and Paul Hetman.The family extends its sincere appreciation to the caring staff at the St. Cloud VA Building 51.Memorials preferred to the St. Cloud VA.

Memorials are preferred to the St. Cloud VA Medical Center

It was with sadness that I heard about the death of my Uncle Richard today. As a child, I fondly remember Richard giving me a ride in his pickup truck and telling me stories ab out serving in the Navy and working on the Soo Line. Whenever I think about my childhood visits to the farm, I still see Richard working, with Grandpa Hetman’s dog nearby. My family and I will keep him in our daily prayers now and always. May the Lord bless and watch over him forever. Phil and family.