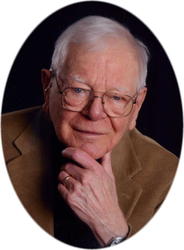 Mass of Christian burial celebrating the life of Richard E. Luger, age 87 of St. Cloud will be 11 AM   Friday, April 15, 2011 at Holy Spirit Catholic Church in St. Cloud.  Father Tom Knoblach will officiate, and burial will take place at the Minnesota State Veterans Cemetery at 2PM.  Dick died peacefully in his home Thursday morning.  Friends may call from 5- 8 PM on Thursday, April 14 at the Miller-Carlin Funeral Home in St. Cloud and again from 10 until the time for service at the church on Friday.  Arrangements are being made with the Miller-Carlin Funeral Home of St. Cloud.Dick was born October 15, 1923 to Emil and Mathilda (Husnik) Luger in Minneapolis.  He served in the U.S. Navy from 1943-1945 and was in the reserve for 5 years following where he fought in the Korean War.  After his time in the service he graduated from the U of M with a degree from the Institute of Technology.  During his time at the U of M he earned an “M” for football in 1948.  He married Suzanne Regnier on January 25, 1958 in La Crosse, WI.  Dick worked for Northwest Bell (now Qwest) as a District Engineer for 31 years before retiring in September of 1984.  He lived most of his life in the St. Paul area, but retired to a lake home near Annandale and later St. Cloud.   After retirement Dick Sue became antiques dealers.  Dick was also an avid hunter.  He was a member of the “M” Club for football at the U of M.  Dick was also a member of the Holy Spirit parish in St. Cloud.Dick is survived by his wife Suzanne Luger, St. Cloud; his children Laura (Chuck) Aase, Prior Lake; Kathleen (Courtney) Brown, Rogers; Suzanne Luger, San Francisco; Matthew Luger, Milwaukee, WI; Mark (Laura) Luger, Phoenix, AZ; and his grandchildren Madeline Aase, Max Brown, Alex Luger, Calista Luger, and Olivia Luger.He is preceded in death by his parents Mathilda and Emil Luger and his brothers Eugene Luger and Emil Luger Jr.In lieu of flowers, memorials are preferred to Centracare St. Cloud Hospital Hospice.

Friends may call from 5- 8 PM on Thursday, April 14 at the Miller-Carlin Funeral Home in St. Cloud and again from 10 until the time for service at the church on Friday.

In lieu of flowers, memorials are preferred to Centracare Hospice.

So sorry to hear about Dick. May the memories you have of him comfort you at your time of loss.