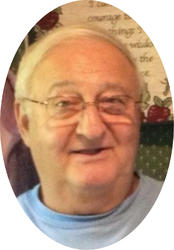 Services celebrating the life of Raymond H. Volk, age 80 of Sartell will be 11:00 AM, Thursday June 15 at Grace Lutheran Church in Becker, MN.  Burial will be in Assumption Cemetery.  Ray died Sunday at the St. Cloud Hospital.  There will be a visitation from 4-8:00 PM Wednesday and again after 10:00 AM, Thursday at the church in Becker.  Grace Lutheran prayers will be at 7:00 PM, Wednesday at the church.  Arrangements are being made by the Miller-Carlin Funeral Homes.

Ray was born April 16, 1937 in Celements, MN to Raymond and Hazel, (Iesh) Volk. He grew up in Redwood Falls and entered the U.S. Navy where he served from 1955 until 1964.  Ray married Everline Radel on June 14, 1960 in Yokohoma Japan.  The couple lived in Brainerd from 1965 until they moved to St. Cloud in 1989.  Ray owned an auto parts business from 1965 until 1983, then he worked as a Chevrolet Service Manager in Little Falls.  He also worked as a Chemical Dependency Counselor at the St. Cloud Hospital for 20 years.  Ray was a member of Grace Lutheran Church in Becker and Alcoholics Anonymous.

Ray is preceded in death by his parents, his wife, Everline on November 8, 2003 and his sister, Betty Jean Hendrickson.

Services will be 11:00 AM, Thursday June 15 at Grace Lutheran Church in Becker, MN. Burial will be in Assumption Cemetery.