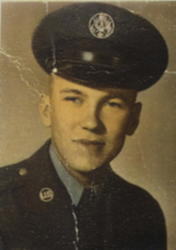 Mass of Christian burial, celebrating the life of Milton D. Sorenson, age 77, of Litchfield will be Wednesday, June 30, 2010 at 11:00 AM.  Burial will take place in the parish cemetery following the service.  Monsignor Francis Garvey will officiate.  Friends may call from 6-8 PM, Tuesday, June 29 at Church of Our Lady in Manannah, and again at 10:00 AM before the service.  Arrangements are being made with the Miller-Carlin Funeral Home in St Cloud.Milton was born October 6, 1932 in Madison, MN to Thea (Ronglien) and Martin Sorenson.  He grew up in Louisburg, MN until enlisting in the Air Force in 1953.  After his time in the service where he fought in the Korean War he lived in the Twin Cities area.  Milton married Donna Marchand on March 16, 1968 in Milbank, SD.  The couple then moved to Grove City where he spent his life.  Milton worked as a Cement Worker for Piner Nelson and Sons for 17 years.  After being diagnosed with severe diabetes 1973, he was forced into retirement.  He was a member of the Litchfield Legion Post 64, and the Litchfield VFW.  Milton was also a member of Church of Our Lady in Manannah.Milton is survived by his wife Donna Sorenson, Litchfield; his sons and daughters Wanda (Tom) Pawlowski, Prior Lake; Carl Loerzel, Atlanta GA; Randy (Gayle) Loerzel, Redwood Falls; April (Andy) Lindquist, Bloomington; and Glen (Kellie) Sorenson, St. Louis Park.  He is also survived by 18 grandchildren and 10 great-grandchildren.Milton is preceded in death by his son Joe Sorenson.  He is also preceded by his brothers Mayne, Levi, Tilman, and Elmo Sorenson

There will be a visitation from 6-8 PM, Tuesday, June 29 at Church of Our Lady in Manannah, and again at 10:00 AM before the service.

Church of Our Lady, Manannah MN

Donna
I was saddened by the news that you had lost Milt. Strange that I only met him the week before and he seemed such a fun-loving person. -kay

Donna, Glen, April,
We are so sorry for the loss of Milton. He was a good friend for a long time. Our families have been so intertwined with you,Donna being such a good friend to my mother Marion and Lori’s mom Delores. April watching our girls for us and myself spending so much time with Joey. We will miss Milton dearly. God bless you. Bob and Lori

My prayers continue to go out to all of you. Uncle Mitty was my favorite Uncle and he will be sadly missed by all who were touched by his life.
Love, LeAnn