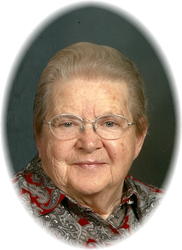 Services celebrating the life of Mary Louise Passe, age 85 of St. Martin, will be 11:00 AM at the St. Martin Catholic Church in St. Martin.  Burial will be in the Fort Snelling National Cemetery.  There will be a visitation from 4-8:00 PM Wednesday and again after 10:00 AM Thursday, at the St. Martin Parish Hall.  The Albany Legion Auxiliary will pray at 6:30 PM followed by the St. Martin parish prayers at 7:00 PM Wednesday evening at the St. Martin parish hall.  Arrangements are being made by the Miller-Carlin-Brenny Funeral Home in Albany.Mary was born June 4, 1925 in Wabasha to Henry and Mary (Loechler) Kreye.  She Married Richard Passe on April 10, 1948 in Wabasha.  The couple lived in Minneapolis before moving to St. Martin.  Mary helped Richard farm and she worked at Fingerhut in St. Cloud.  She was a member of the St. Martin Catholic Church, Wabasha VFW Legion Auxiliary, the Albany American Legion Auxiliary and the St. Bonifacius Mission.Mary is survived by her sons, Dean (Doris Eggert) Passe, St. Cloud and Dale (Lorie) Passe, St. Cloud.   She is also survived by her brothers and sisters,Richard “Cracky” (Cornetta “Corky”) Kreye, Wabasha; Bernard “Ben” (Marcine) Kreye, Zion, IL; Lavina Dilliger, Ark.; Helen (Bob) Robella; Pepin, WI; and 2 grandsons, Taylor and Zachary Passe.Mary is preceded in death by her parents, her husband Richard on April 15, 2009, her brothers and sisters, Robert Kreye; Julius Kreye; Lloyd Kreye; Francis Kreye; Joe Kreye;  Marlene Kreye, Florence Kreye and an infant brother.

Services celebrating the life of Mary Passe, age 85 of St. Martin, will be 11:00 AM Thursday, January 27, 2011 at the St. Martin Catholic Church in St. Martin. Burial will be in the Fort Snelling National Cemetery.

Dear Dean and Dale
We are so sorry to hear that Aunt Mary is gone . I know that you hear this all the time . Now she is happy again and now united with Uncle Richie again . I loved them both so much ..
Sorry we can’t make it up that way . You all are in are thoughts . You are all in are prayers .. My God Bless You and Look Over you All ..
Are Love to you all .
Mick & Karen Soby and Family

Mary was a very warm, compassionate person, who shared a lot of humor and love with those around her.
May she find happiness again in Heaven, reunited with her beloved husband Richard and other passed relatives.
Our prayers and thoughts go out to her two sons and their families in this time of sadness.

Aunt Mary, you will be missed. Had a lot of good times and the memories will always be with me and not forgotten. I remember days staying on the farm in the summer and the fun us kids had. you are in my thoughts and always in my heart, till we meet again.RIP Love your niece Jean

Rest in peace, Aunt Mary…you lived a full life and wonderful life. You will be missed by many. My thoughts and prayers go out to family and friends who mourn the loss of our loved one. Love to all. Lori

DEAN & DALE & FAMILY
Kay & I are sadden with passing of Mary. Both of your parents were and remain very special people in our lives. Our memories of them are so precious that they are talked about often, especially around bon fires. This is a sad chapter in the passing of “The Greatest Generation”. May God receive and bless Mary and reunite her with Richie in His kingdom. We are so sorry we cannot be with you in these sad times.
Love you guys,
Keith & Kay and Family

Sympathies to everyone in your family. Our farm (Math and Susan Klassen) was about a mile from Richard and Mary’s farm. I remember the day “we got new neighbors” from Minneapolis – with a boy my age (David Davidschofer). Richard combined our grain for many years with that IH combine. Mary was kind, yet firm, whenever David and I needed straightening out. Thanks, Mary and Richard. You are missed.

Dean and Dale,
We are sad to hear of your mother’s passing. I remember such great times with your mom (and dad) at countless weddings, birthday parties and family reunions filled with laughter and fun. These warm memories will keep her love among us forever. I thought of you and your loved ones this morning (around the time of your mom’s funeral) and wondered how you were doing. I hope you are in peace, as she now has found eternal happiness with your dad at God’s side. We are sorry to have been unable to attend the services for your mom today and the peaceful reflection that these gatherings offer. Peace be with you during this difficult time.
Love to all,
Tom, Maryann, Theresa and Michelle

Aunt Mary will be missed, but now she will be at peace and now be reunited with her beloved husband. God Bless her. Our Thoughts and Prayers go out to the family.
Love,
Greg, Debbie, Sarah, Amy, & Jenny