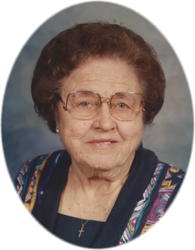 The Mass of Christian Burial, celebrating the life of Margaret Huls, age 97 of Opole, will be at 11:00 AM, Monday, April 27, at Our Lady of Mount Carmel Catholic Church in Opole.  Burial will be in St. Columbkille Catholic Cemetery in St. Wendell.  Margaret died Tuesday, with her family at her side, at the Mother of Mercy Nursing Home in Albany.  There will be a visitation from 3:00 – 7:00 PM Sunday and again after 10:00 AM Monday at the church in Opole.  Our Lady of Mount Carmel parish prayers will be at 4:00 PM Sunday at the church.  Arrangements are being made by the Miller-Carlin Funeral Homes.

Margaret was born September 30, 1917 in Holdingford to Frank and Elsie (Kiley) Wunderlich.  She grew up on the family farm near Opole.  She married Hubert Huls on August 22, 1944 in St. Mary’s Catholic Church in Holdingford.  Margaret lived in several places while Hubert was in the military, including several years in Washington DC.  The couple moved to Little Falls before purchasing her family farm in Opole, where she lived the rest of her life.  Margaret earned a Master’s Degree in Education and she taught at several elementary schools in central Minnesota, retiring in 1982 from the Holdingford school District.  She was a member of the Oblates of St. Benedict’s and had been a member for more than 75 years.  She was also a member of Our Lady of Mount Carmel Catholic Church, the Christian Women and the Catholic War Vets of Opole.

She is preceded in death by her parents, her husband in 1983, her sons, Herbert and John Huls, her great-granddaughter, Ally Serena Omer; her brothers, Christopher, Norman, Leonard, Edward Wunderlich, and her sisters, Lucille Kampa and Alvina Kurtz.

Our Lady of Mount Carmel Catholic Church in Opole

The Mass of Christian Burial, celebrating the life of Margaret Huls, age 97 of Opole, will be at 11:00 AM, Monday, April 27, 2015. Father Greg Mastery will officiate and burial will be in St. Columbkille Catholic Cemetery in St. Wendell.

Our Lady of Mount Carmel Catholic Church in Opole

My thoughts and prayers are with you on the passing of Aunt Margaret.  What a wonderful reunion they must be having in heaven!  Aunt Margaret was such a sweet lady.  I know she will be greatly missed by all who had the pleasure of knowing her.