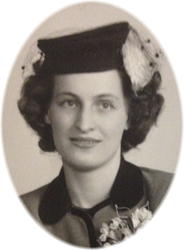 The Mass of Christian Burial, celebrating the life of Margaret Mahoney, age 96 of St. Cloud, will be at 12:30 PM, Wednesday, April 6 at the Church of St. Augustine in St. Cloud.  Burial will be in the Minnesota State Veterans Cemetery in Little Falls.  Margaret died at her home in St. Cloud.  There will be a visitation between 11:30 AM and the time of services Wednesday at the church in St. Cloud.  Arrangements are being made by the Miller-Carlin Funeral Homes.

Margaret was born July 16, 1919 in St. Paul to Joseph and Mary (Haag) Mair.  She lived in Perham until moving to Chicago in 1942.  She married James Mahoney on January 30, 1943 in Chicago. The couple moved to St. Paul in 1948 and then to St. Cloud in 1966.  Margaret worked in the offices of the St. Cloud Correctional Facility and then at the St. Cloud Hearing Aid Center.  She was a member of the Church of St. Augustine, the Legion of Mary, the Daughter of Isabella and the funeral choir.

Margaret is preceded in death by her parents, her husband James on November 30, 2012, her daughter Patrice Mahoney; her brothers Andrew, Joseph, Roman and Fredrick Mair, and her sisters Eleanor Weimer and Angela Hansen.

Family and friends will be received from11:30 AM until the time of services on Wednesday, April 6, 2016 at the Church of St. Augustinein St. Cloud.

The Mass of Christian Burialwill be at 12:30 PM onWednesday, April 6 at the Church of St. Augustine in St. Cloud.