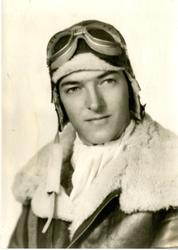 A memorial service will be at the Church of the Holy Spirit on Saturday, June 8, 2013 at 11:00 a.m. for John Voth, age 92. He died Monday, June 3. Reverend Father Tom Knoblauch and Father Al Stangl will officiate. Entombment will be private at the Minnesota State Veterans Cemetery, Little Falls, MN. Visitation will be 5-8 p.m. Friday, June 7, at the Miller Carlin Funeral Home, St. Cloud, and one hour prior to the funeral at the church on Saturday.John was born February 9, 1921 in Fair Haven to David J. Voth and Annabelle Hiebert Voth. The family moved to St. Cloud in 1928 and St. Cloud was his residence, except for his military service. He was an active Boy Scout and graduated from Technical High School in 1939, followed by two years at St. Cloud Teacher’s College. After his years in the United States Army Air Corps, he purchased the St. Cloud Hobby Shop and built it up to the fourth largest hobby shop in the state of Minnesota. He returned to St. Cloud Teacher’s College, finished his Bachelor’s Degree and acquired a Doctoral Degree in Industrial Education, teaching high school in Hutchinson, 13 years at Sartell High School and nights at the Minnesota State Reformatory. John married Adeline B. Dickinson on October 2, 1942 at the residence of Reverend Father Denery in Waite Park. Three days later he left for the Army Air Corps. This was World War II. John Voth was a great leader, a perfect gentleman always, a wonderful husband for 70 years, a father who included his two children in everything. His main passion was aviation, but he also loved nature, was an ornithologist and was an avid rock and mineral collector. After spending 27 years in the United States Air Force he wore the rating of Lt. Colonel, logging 9,000 hours of flying time until his death. He is an enlistee in the Minnesota Aviation Hall of Fame. He served as manager of the LeSeur Flying Service in St. Peter followed by three years as Engineer Officer at the Air Defense Base in Duluth. Under his Experimental Aircraft Association (EAA) #551 he assisted eight to 17 year olds in the EAA Young Eagles Program. He was also a member of the American Legion Silver Star #428, Stearns County History Museum, Minnesota State Cemetery, StandDown, Trustee #1 for Elks, Pilots of 1944, Treasurer of the 1938 Techos, active member of the Jaycees, charter member of the Saint Cloud Exchange Club, and maintained a home based gift shop of his beautiful wooden artwork attending about ten art shows annually.Survivors include his wife of 70 years, Dickie (Adeline), daughter Diane J. (DJ) Voth, and son John R. Voth, each from St. Cloud, and grandchildren Brittany D. Voth and Michael J. Voth, both from Champlin, MN, and brother Robert J. Voth and his wife Irene from San Diego, CA.Preceded in death were parents and brothers Richard, Lt. Col. Stanley and sisters, Edna and Hilda, also “Holly” our Amazon Yellowhead parrot of 48 years and “Maxwell” our African Grey parrot, 32 years.

Friends may call from 5-8PM Friday, June 7th at the Miller-Carlin Funeral Home in Saint Cloud and again from 10AM until the time of the service Saturday morning once again at the church in Saint Cloud.

My condolences to Dickie, Diane and John,
It’s been many years since my days of babysitting for you and working in the Hobby Shop. My heart goes out to you on the death of a very dear man.

I’m so sorry to hear about John’s passing — although it’s been a while since I’ve seen John and Dickey, you are certainly in my prayers.