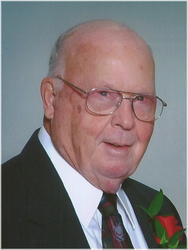 The Mass of Christian Burial, celebrating the life of John F. Kurowski, age 88 of Sartell, will be 12 Noon on Wednesday, January 4, 2017, at the St. Francis Xavier Catholic Church in Sartell and burial will be at the Minnesota State Veterans Cemetery in Little Falls.  John died peacefully of natural causes on December 17 at the St. Cloud Hospital. There will be a visitation one hour prior to Mass. Arrangements are being made by the Miller-Carlin Funeral Homes.

Born in Little Falls on May 28th, 1928, John was raised in a rural farmhouse outside of Little Falls, MN where he proudly graduated from Pike Creek Elementary and Morrison County High School.  The youngest of six siblings, John was mesmerized by music at an early age.  During his elementary and early high school years, he spent countless hours becoming a self-taught musical wunderkind and mastered playing several instruments, his favorite being the accordion.  He formed his first of several bands at the age of 15 performing for many people at a variety of venues.  This became a lifelong passion that he continued because it brought happiness and fun to a wide variety of people and places.

John served in the United States Army, 101st Airborne Division in Camp Breckinridge Kentucky from 1950 to 1952 during the Korean War.  He was honorably discharged with the rank of Corporal.  He was a clerk typist, managed the camp supplies and also regularly performed music at the Officers Club.  He was actively recruited to reenlist by Major General Ray E. Porter of the 101st Airborne Division based on his stellar service record and performing his duties in an outstanding manner.  He left the military after his initial duty was up and chose to resume his civilian life.

After his military service, John became a successful entrepreneur and built a career in a variety of independently owned businesses.  Insisting on being his own boss, his professional career included band leader/member, insurance agent, furniture store owner and a distributor of Paymaster check writers, and forgery protection.  John was also an avid outdoorsman who enjoyed camping, hunting, fishing, and waterskiing.  He spent many years living on a lake and much of his free time with friends and family doing the things he loved.

Even though John thoroughly enjoyed music and the outdoors, his greatest passion was his family.  He did everything with them in mind.  John is survived by his devoted and caring wife of 61 years, Patricia, Sartell.  Together they spent their life providing for and raising a responsible and caring family.  This includes, Linda (Donald) Welter, Ronake, VA; sons, Terry (Lori) Kurowski, St. Cloud; Brian (Denise) Kurowski, Big Lake and Greg (Anne) Kurowski, Victoria.  He was blessed with seven amazing grandchildren and eight wonderful great grandchildren.  His memory will be cherished by all that knew him.  His legacy will be preserved in their experiences, thoughts and future behaviors.

Memorials are preferred to the Wounded Warrior Project or the Disabled American Veterans.

Aunt Pat, Terry, Brian and Greg and families,   My deepest sympathy to all of you.  Uncle Johnny was one of a kind-a legend.  I will always remember him playing the accordion.  My mother talked warmly about the baby in the family.  We plan on attending the funeral when it is set.  Your in our thoughts and prayers.

I knew John through his Paymaster business and had heard his name mentioned on the KASM radio obituary announcements.  My sincere sympathy to all of you, John was such a fine gentleman!  It was a pleasure to get to know him and to experience his zest for life when he came to service the Paymaster machine at the organization I worked for in New Munich.  He always had a twinkle in his eye and kind words to share.  I am sorry for your loss — I can only imagine how much he will be missed!  I just wanted to let you know that even in seemingly insignificant interactions his presence is remembered and cherished.   Sincerely,   Julie Heinze