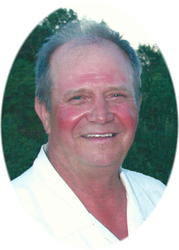 Funeral services celebrating the life of James “Jim” Raymond Lemke, age 65 of Avon will be 11AM, Friday July 6th, 2012 at Immanuel Lutheran Church of Farming.  Pastor Frederick Kutter will officiate and burial will take place in the church cemetery following the service.  Jim died suddenly and unexpectedly Sunday afternoon at his home in Avon.  There will be a visitation from 4-8 PM, Thursday, July 5th, 2012 at the Miller-Carlin Funeral Home in Albany and again from 10 AM until the time of the service Friday morning at the church.  Arrangements are being made with the Miller-Carlin Funeral Home of Albany. Jim was born May 9th 1947 in Avon to John and Hildegard (Arceneau) Lemke.  He lived his entire life in Avon.  Jim served in the Army until 1968 and shortly after married Carolyn Pender in Chisholm, MN.  He worked his entire life as a farmer and most recently worked at Wesbeck Trucking.  Jim had a passion for the outdoors where he spent a lot of his time hunting and fishing.  He was also an avid Minnesota sports fan with a great deal of love of the Twins and Vikings.  Most of all, Jim loved spending time with his family, especially his grandkids.  He was also a member of the Avon Legion and Immanuel Lutheran Church of Farming.Jim is survived by his ex-wife Carolyn Lemke, Avon; Tammy (Craig) Sexton, Rice; Angie (Randy) Petermeier, Rice; his grandchildren Ryan and Olivia Osterman, Kyle Petermeier, and Cailee and Burke Sexton; and his siblings Carl (Marianne) Lemke, Albany; Kevin (Marlene) Lemke, Avon; Luella (Kenny) Lehner, Winsted; Betty (David) Klug; Carol (Lloyd) Brix, Cuyuna; Stella Bredeck, St. Cloud; Susie (Jerry) Funk, Grey Eagle; Annie (Joe) Funk, Albany.He is preceded in death by his parents John and Hildegard Lemke, his brother David Lemke, and his infant brother Eugene Lemke.

Our thoughts and prayers are with all of Jim’s family and friends. He was a good friend and will be greatly missed.

My thoughts and prayers are with all of Jim’s family. I am so sorry for your loss.