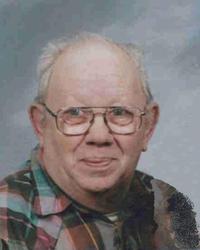 HUBERT WASNER
September 4, 1934 – September 18, 2009
The Mass of Christian Burial, celebrating the life of Hubert Wasner, age 75 of Holdingford, will
be 11:00 AM Tuesday, September 22 at St. Mary’s Catholic Church in Holdingford.  Burial will
be in the parish cemetery.  Hubert died at his home in Holdingford.  Friends may call from 4-8:00
PM Monday and again after 9:30 AM Tuesday at the Miller-Carlin-Brenny Funeral Home in
Holdingford.  St. Mary’s Parish Prayers will be at 7:00 PM Monday at the funeral home. Hubert was born September 4, 1934 in St. Joseph to Mathias and Justina (Reisinger) Wasner.  He
grew up in St. Joseph and married Marian Reischl on June 24, 1961 in St. Joseph’s Catholic
Church.  The couple farmed in St. Joe until 1968 when they moved to their farm in Holdingford.
Hubert was a full time farmer, but he also worked off the farm at Cold Spring Granite and then
American Linen.   Hubert was a member of St. Mary’s Catholic Church in Holdingford. Hubert is survived by his children, Mary (Kevin) Swenson, Foley, Cheryl (Richard Frazier)
Acevedo, Elk River and Brad (Laura) Wasner, Holdingford.  He is also survived by his sisters
and brother, Caroline (Lester) Roering, St. Joseph; Sylvester (Doris) Wasner, Rice; Mary
Schneider, Waite Park; 10 grandchildren and 1 great-grandchild. Hubert is preceded in death by his parents, his wife Marian on May 28, 2004 and his brothers,
Lawrence Wasner and Celestine Pierskalla.