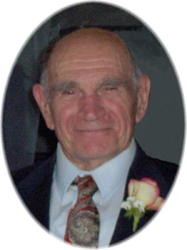 Mass of Christian burial celebrating the life of Gregory Julius Locnikar, age 87 of Freeport will be 11 AM  Friday, December 31, 2010 at St. Francis of Assisi Catholic Church in St. Francis.  Father Mike Kellog will officiate and burial will take place in the parish cemetery following the service.  Gregory died at the Melrose Hospital Monday evening.  Friends may call from 4-8 PM on Thursday, December 30, 2010 at the Miller-Carlin Brenny Funeral Home in Albany, and again from 10 AM until the time of the service at the church on Friday.  Parish prayers will be at 5 PM at the funeral home on Thursday.  Arrangements are being made with the Miller-Carlin Brenny Funeral Home in Albany.Gregory J. Locnikar was born July 17, 1923 to Conrad and Ottilia (Kubicek) Locnikar north of Albany on the family farm.  He attended school in Albany through the 6th grade before starting many years of hard work.  Gregor was united in marriage to Evelyn Gerads on September 9, 1947 in Sauk Centre, MN.  They made their home in Albany before finally settling in St. Francis, MN.  They were blessed with two daughters and six sons.Gregor was a wonderful husband, great father, fun grandpa, and loving great-grandfather.  He was a jack of all trades from being a farmer, to a cowboy, to working over 30 years in road maintenance for Krain Township.  He worked hard, and complained little.  He was also the custodian and sacristan for St. Francis of Assisi Catholic Church in St. Francis since 1988 which brought him much joy and many good friends.Horseshoes, dancing, hunting, fishing, cards, gardening and helping others were Gregor’s favorite past times.  In fact, there are hundreds of horseshoe trophies all over their home, and their grandchildren’s homes to prove it.Gregor is survived by his loving wife of 63 years, Evelyn Locnikar, Freeport; his daughters Jean (Harry) Dingmann, Richmond; Anna (Duane) Dingmann, Avon; his sons Joseph (Denise) Locnikar, Fargo, ND; Thomas Locnikar, St. Anna; Paul (Gail) Locnikar; St. Anna; Peter (Fayette) Locnikar, Pillager; Andrew Locnikar, Burtrum; Philip (Cheryl) Locnikar, Albany; twenty grandchildren, and twelve great-grandchildren; his brothers and sisters Conrad (Genny) Locnikar, Albany, Rita Rakotz, Minneapolis; Eileen VanHeel, Minneapolis; Delores Lange, Cottage Grove; Florian (Valaria) Locnikar, Fridley; MaryAnn (Harry) Scot, St. Joseph; LeRoy Locnikar, Rogers; Viola (Anthony) Barthel, Richmond.Gregor is preceded in death by his parents, his grand-daughter Jodi, his brother Ervin, and brothers-in-law Ralph Gerads, Peter Rakotz, Norbert VanHeel, and Elmer Lange.

Friends may call from 4-8 PM on Thursday, December 30, 2010 at the Miller-Carlin Brenny Funeral Home in Albany, and again from 10 AM until the time of the service at the church on Friday. Parish prayers will be at 5 PM at the funeral home on Thursday

To Tom and the entire Locnikar family.
Jen and I are so sorry to hear about your father. He was a great man and I will remember the times I met him down by the lake on Father’s Day.
Take care and God Bless.
Mike and Jen.