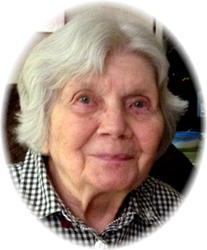 Services Celebrating the Life of Grace M. (Unger) Warner, 91, of Saint Cloud will be 11:00 AM on Tuesday, September 23, 2014 at the Miller-Carlin Funeral Home in Saint Cloud.  Reverend Barbara Winter Martin will officiate and burial will take place in Northstar cemetery following the service.  Grace passed away Wednesday evening with family at her side.  There will be a visitation from 4:00-8:00 PM Monday evening at the funeral home and again after 10:00 AM until the time of service Tuesday morning.  Arrangements are being made with Miller-Carlin Funeral Home in Saint Cloud.

Grace was born June 26, 1923 to Peter and Helen (Nickel) Unger in Grand Forks, ND.  She was raised with three siblings and graduated from Scappoose Union High School in OR.  Grace travelled throughout her early life, living in such places as North Dakota, Oregon, California, Florida, Illinois, and Wisconsin before ending up in Minnesota.  She spent a year working as a typist for the Army-Air Force in CA before working for a cap and gown company in Illinois.  Grace married Rodney Warner on December 23, 1943 and together they raised five children.  Later in her life, she worked as a home daycare provider for about ten years.  Grace and Rod were members of the American Tree Farm Association and she was a former member of a local gardening club.  She also was a contributing member of the Stearns County Historical Museum.  Grace loved being outdoors, gardening, fishing, and the family cabin in Backus.  She cherished the time spent with her family.

She is preceded in death by her parents Peter and Helen, her husband Rod who passed away in 1991, and her son Jeffrey in 1960.

There will be a visitation from 4:00-8:00 PM Monday evening at the funeral home and again after 10:00 AM until the time of service Tuesday morning.

Aunt Grace was a very special and sweet lady to me. Whenever she could, she would save up money to fly all the way from Minnesota to Oregon to visit us. She was quick to share her love, wit, wisdom and humor with us. She also had a keen intereste in our family even though we lived such a long way apart. I will forever cherish her visits to Oregon and the bonds that we formed.  She will be missed!

Dennis,  We are so sorry for your loss.  Though I never met your mom, I know she was a very special person, as I learned through your posts and photos on Facebook.  I always loved to hear about the times you had ice cream together!!   Much love and sympathy, Curtis & Loretta

Thank you Grace for being such a wonderful little sister. You were the smallest of the four of us kids but the first to leave home to get a job, get married, have family and now to leave us. We were so lucky to have had you in our lives.what a blessing, “rest in peace”. I will see later, Love Jackie

We are so sorry to hear your Mom leaves..I still remember you often drive to her house and helped her to do the cleaning work there. I felt her smile and kindness when she says: ” hello Dena!”via phone when she got you around with her at her house.  Blessings from China to you all,

My sister was a gentle, loving person, always thinking of others–I have missed her so much

My family describes Grace as loving and kind.  I didn’t have the opportunity to know her as well as I would have liked, but enjoyed sending her pictures, and getting updates from my Grandma (her sister). My heart is sad for those left behind, but happy for Grace to reunite with her beloved family on the other side.  The family is in my thoughts and prayers!