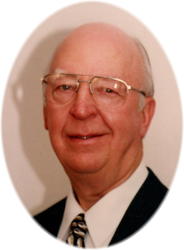 Services will be 10:30 AM, Friday, April 12 at Holy Cross Lutheran Church in St. Cloud for George W. Marklowitz, age 86 of St. Cloud. George died surrounded by his loving family, Monday at the Veterans Affairs Medical Center in St. Cloud. Burial will be in Trinity Lutheran Cemetery in Sauk Rapids. There will be a visitation from 9:30 until the time of the services at the church in St. Cloud. Arrangements are being made by the Miller-Carlin Funeral Home, St. Cloud. George was born January 23, 1927 in Clearwater to Fred and Lydia (Stern) Marklowitz. He was a U.S. Navy veteran of WWII, serving in the Pacific and Asiatic theater. George married Fredora Kranz on April 22, 1950 at Popple Creek. George worked as an accountant for B&B Oil Company and JM Oil Company for forty two years. After retirement, he volunteered with RSVP, Whitney Senior Center and the Paramount Theater. He also worked part time with Walmart. George was a member of Holy Cross Lutheran Church where he served on the Sunday School Board for 22 years. He was also on the Board of Directors of the Good Shepherd Lutheran Home for six years. He was a member of the American Legion Post 428 in Waite Park, St. Cloud East Side VFW Post 428, and the Eagles Aerie 622. George is survived by his fiancée, Ethel Travis, St. Cloud; daughters; Victoria (Robert) Eizenhoefer, St. Cloud; Sandra Williams, St. Cloud; Gail (Douglas) Brennan, St. Cloud; Karen Marklowitz, St. Cloud; grandchildren; Beth (Kurt) Reimer, Ellen Wiatrowski, Lisa Burgess, Cheryl Schlief, Travis Habiger, Karla Habiger, Justin Ritzer, Tamara Kula, Chad Eizenhoefer, Wesley Eizenhoefer, and 22 great-grandchildren. He is also survived by his brothers and sister; Milo (Ida) Marklowitz, St. Cloud; Frederick Marklowitz, Minneapolis and Arlene Hetrick, Kingman, AZ. George is preceded in death by his parents, his wife, Fredora in 1994, son, Randy Marklowitz and three brothers, Norman, Glen, and Donald.

There will be a visitation from 9:30 until the time of the services at the church in St. Cloud.

Our prayers are with you.

Beth, our sympathy to your family, your in our thoughts and prayers.