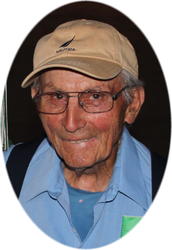 The Mass of Christian Burial celebrating the life of Frank Felix Warzecha, age 87, of Holdingford, will take place Saturday, March 14 at 10:30 AM in the St. Columbkille Catholic Church, St. Wendel. Frank passed away peacefully Saturday morning, March 7, with his family and wife of 59 years by his side.  Family and friends may call from 4:00-8:00 PM Friday and again after 9:00 AM Saturday at the St. Columbkille Catholic Church.

Frank was born January 11, 1928, the fifth of eight children, to the late Frank and Stella (Stein) Warzecha of Holdingford, Minnesota. Frank served in the U.S. Army, primarily in Alaska’s Aleutian Islands, from 1944 until 1948. He is a member of the Holdingford American Legion. Upon returning home from his military service, Frank made up his mind to start his own business. In 1949, along with his brothers Vince and Roy, Frank founded the Opole Blacksmith Shop, which eventually became Polar Tank Trailer. Later, with his partners, he founded Lake State Industries, only officially retiring from the company in 2001 at the age of 73. In addition to his work at both Polar and Lake State, Frank has actively farmed near Opole, and later Oklee, Minnesota, up until the present. Frank enjoyed his work, but he also knew how to laugh and have a good time. He enjoyed spending time with his family and his two dogs, Kit and Sparky.

Frank was preceded in death by his brothers Roy, Vince, Joseph, and Claudius, as well as his parents Frank and Stella.

The family prefers memorials be made to the Alzheimer’s Association.

Visitation will be 4-8:00 PM, Friday, March 13 and again after 9:00 AM, Saturday,at St. Columbkille Catholic Church in St. Wendel

Memorials are preferred to the Alzheimer’s Association

Mass of Christian burial will be at 10:30 AM, Saturday, March 14 at the St. Columbkille Catholic Church in St. Wendel.