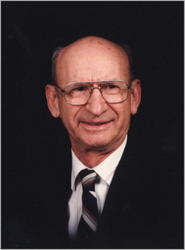 Funeral services celebrating the life of Frank Eugene Sylvester, age 94 of Albany (formerly Oklahoma City) will take place at 3PM Tuesday, September 24, 2013 at the Miller-Carlin Brenny Funeral Home in Albany.  Pastor Frederick Kutter will officiate.  Burial will take place at Chapel Hill Memorial Gardens in Oklahoma City later this week.  Frank died peacefully with family at his side at the St. Cloud VA Saturday evening.  There will be a gathering time from 2PM until the time of the service Tuesday afternoon at the funeral home in Albany.  Arrangements are being made with the Miller-Carlin Funeral Home of Albany.Frank was born on June 16th 1919 to Theodore and Oral (Ash) Sylvester in Bethel, MN.  He was baptized into the Christian faith on July 15, 1919 in Minneapolis and later confirmed on May 31, 1936 in Sioux Valley, MN.  He married Erna Will on November 21st 1945.  He later married Lorraine Klug on July 17, 1992 at Seven Dolors Catholic Church in Albany.  Frank served his country during WWII from 1941- 1945 in the U.S. Army Air Corps.  His oversea service included service in the European theater and four major battle campaigns.  Frank earned the title of Master Sergeant.  He also served with the Oklahoma Air National Guard.   After his time of service, Frank worked as an Aircraft Mechanic.  He worked for the Chickasha Flying Service, Chickasha, OK., Ross Aviation, Fort Still, OK., and the Federal Aviation Administration in Oklahoma City where he eventually retired as a Leadman in 1981.  His hobby was playing the accordion where he played with the Masopust Polka Band for several years entertaining many local nursing homes in Oklahoma and Minnesota.  Frank was a past member and elder of Immanuel Lutheran Church in Oklahoma City, and a member of Immanuel Lutheran Church in Farming.Frank is survived by his children Lynda (L.J.) Gleason, Slidell, LA; Theodore (Jewell) Sylvester, Mt. Home, MO.; his step-children Carol Klug, Waite Park; Sandra (Philip) Maus, St. Joseph; Nancy (Andrew) Schmidt, Staples; Tom (Liz) Klug, Haslet, TX.; his daughter-in-law Sandra Sylvester, Oklahoma City; his brother Robert (Betty) Sylvester, Granite Shoals, TX.; his 17 grand and step-grandchildren and 11 great-and step-great-grandchildren.    He is preceded in death by his parents Oral and Theodore Sylvester, his first wife Erna Sylvester, his son Donald Sylvester, his second wife Lorraine Klug-Sylvester, his brother Louis Sylvester, and sister Florence Smith.A special thank you to the staff at the St. Cloud VA and Mother of Mercy Campus of Care for their love and care they have given Frank.

Uncle Frank was an amazing and strong Christian family man. …He was loving and compassionate and always ready to make music, work hard, or make you laugh…he enjoyed life to the full…and always made sure you knew he cared about you…his legacy of love and compassion live on in his children…well done Uncle Frank…enter into the joy of the Lord.

We are so very sorry to hear of Frank’s passing. He joined us on our 25th anniversary cruise and will be remembered as a very sweet, gentle man. Our thoughts and prayers are with his family during this difficult time.
Bruce/Sue (Ruegemer) Petersen

I was associated with Frank during his years as chief Mechanic for the Engineers Flying Club in Bethany Ok. He was a good friend. We have many fond memories of our times with him.

Grandpa, what can I say that everyone doesn’t already know. You were a very great man, one of the very few I had in my life. The love you had with both Grandma & Lorraine is the kind of love that I hope for I with the man I spend the rest of my life with. Your love, compassion, understanding, faithfulness, faith in God and your strength are the standards I will expect for the one God has chosen for me, yes I know these are high standards but I know you wouldn’t let me settle for anything less. You were always a great inspiration to me, for that I will always be forever grateful. I will always cherish the memories I had growing up, climbing that big tree in your front yard, playing croquet in the back yard, dancing with you at Czech Hall & most of all listening to you play your accordion whenever I asked you to. I will never forget the time you & Lorraine came to visit in New Orleans and we introduced Lorraine to crawfish (aka mud bugs)! I don’t think I’ve laughed so hard in my life when Lorraine asked us why we enjoyed eating “bugs”. I will carry everything you ever taught me in my heart for the rest of my life. The man I marry will ever be able to be exactly like you but I will make sure he is very close to it. R.I.P. Grandpaw, your loving Granddaughter, Katherine Gleason

The last few days I’ve been thinking about you a lot. All I want to do is pick up the phone to hear your voice one last time. I know deep down in my heart I will get that chance when we are all reunited in God’s Kingdom. So for now I will keep all my memories locked in my heart. I love you Grandpa & miss you so much.
Your loving Granddaughter,
Katherine Gleason