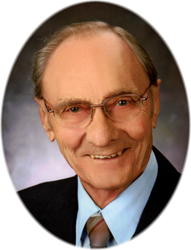 Services celebrating the life of Eugene “Gene” Roy Koglin, age 86, of Albany will be at 11:00 AM Wednesday, January 16, 2013 at Immanuel Lutheran Church in Farming Township.  Pastor Frederick Kutter will officiate and Gene will be laid to rest next to his wife Alvina at Seven Dolors Parish Cemetery following the luncheon.  Gene passed away unexpectedly at his home after a fall Saturday morning.  There will be a visitation for family and friends from 4:00-8:00 PM Tuesday, January 15, 2013 at the Miller-Carlin Funeral Home in Albany and again after 10:00 AM until the time of service Wednesday at Immanuel Lutheran Church.  Arrangements are being made with Miller-Carlin Funeral Home in Albany.Gene was born on January 5, 1927 to Ester (Herberger) and William Koglin in Albany Township.  He grew up in the area with his two brothers, Harold and Sylvester, and learned to weld at a young age at his stepfather’s shop.  Gene spent a year welding in a Californian shipyard before being drafted into the US Army at age 18.  He served for a year in Korea before returning stateside and joining Al Bogard as business partners in 1949.  Gene married Alvina “Sandy” Sand in Albany on Valentines’ Day 1953 and two years later became the owner of a metal fabricating business.  Gene worked hard for the business he grew until medical problems and major heart surgery forced him into early retirement in 1983.  He spent his free time traveling, gardening, and bowling.  Gene also enjoyed baseball, fishing, and going to casinos.  He is well remembered as an amazing storyteller who delighted in pulling his friend’s legs.  Gene was a member of the Albany Legion and the Legion Drill Squad for 30 years and was a past Legion Commander.  He was also a member of the Melrose VFW and the Albany Pioneer Club.  Gene was an active member of Immanuel Lutheran Church.Gene is survived by his sister-in-law Bernice Koglin, Albany; many nieces and nephews; and close friends.He is preceded in death by his wife of 57 years, Alvina; his parents Ester and William Koglin; and his brothers Harold Koglin and Sylvester Koglin.

There will be a visitation for family and friends from 4:00-8:00 PM Tuesday, 15, January, 2013 at the Miller-Carlin Funeral Home in Albany and again after 10:00 AM until the time of service Wednesday at Immanuel Lutheran Church.