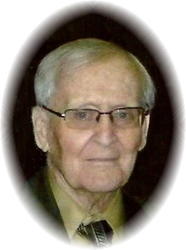 Funeral services celebrating the life of Elmer “Al” Bernard Cremers, age 90 of St. Cloud will be 11AM, Monday, April 30, 2012 at the Miller-Carlin Funeral Chapel in St. Cloud.  Father Al Stangl will officiate, and burial will take place at the Minnesota State Veterans Cemetery following the service.  Elmer died peacefully at the St. Cloud Hospital surrounded by his family Thursday morning.  There will be a visitation from 4-7PM Sunday, April 29, 2012 at the Miller Carlin Funeral Home in St. Cloud and from 10 AM until the time of the service Monday once again at the funeral home in St. Cloud.  Parish prayers will take place at 6PM Sunday evening at the funeral home.  Arrangements are being made with the Miller-Carlin Funeral Home of St. Cloud.Elmer “Al” was born October 12th 1921 in St. Cloud to John and Catherine (Fladung) Cremers.  Elmer “Al” served three years in the U.S. Marine Corps where he spent 27 months overseas in the South Pacific during WWII.  He was a member of the Ancient Order of the Deep where he crossed the equator on the U.S.S. President Monroe Ship in 1942.  After his time in the Marines, he served an additional two years in the U.S. Army.  He married Mary Lou Schneider on June 24, 1947 in St. Cloud.  Elmer “Al” graduated from St. Cloud State University with a bachelor’s degree in Teaching and his later attained his master’s degree in Psychology.  He worked as a licensed psychologist and certified counselor.  For three years he worked for Manpower Development and Training Department of Human Services.  He later worked for the Veterans Administration in the Counseling Psychology department for twenty eight years.  His teaching career started at Staples High School but later moved to St. Cloud State and St. John’s University where he worked as an adjunct professor of psychology.  He also taught as an instructor for American Arbitrators Society in Mediation as well as workshops related to Meyers-Briggs Personality Indicator Assessments.   Elmer “Al” most recently was co-partner with Donna Winskowski in a mediation firm that specialized in parenting, family problems, business disputes, and marriage dissolution called Turning Point.  Besides teaching and counseling, Elmer “Al” also worked in traffic control and accounting for the St. Regis Paper Mill, was a personnel manager at Fingerhut, and owned and operated a private retail business.  Elmer “Al” was very active in the community as well.  He was the chairman of the first St. Cloud Home Show and Pioneer Days.  He was active in the Boys and Girls Club of St. Cloud, and Boy Scouts.  He was also a past president of the Granite City Toastmasters and a member of St. Michaels Catholic Church in St. Cloud.  Elmer’s favorite past times included reading, keeping up on current events, music, walking his beloved dog Mac, taking pride in his cars, and enjoying the beauty of nature including the birds and wildlife in his own backyard.  He took great pride in his work, but took the greatest pride in his family.  He loved his family, his grandchildren, and his great-grandchildren.  The little ones always made him smile.  He will always be remembered for that big smile, his blue eyes, and his strong hand shake.Elmer “Al” is survived by his children Lynda (Ronald) Theisen, St. Cloud; Mary Jo (Ed Lammersen) Cremers, St. Cloud; Jeffry Cremers, St. Cloud; and his grandchildren Chris Theisen, Chad (Yinka) Theisen, Ryan (Naomi) Theisen, Jennifer (Robert “Skip”) Holt, Danielle Cremers, Chelsea Cremers, Nicole Cremers; and his great grandchildren Blake, Trenton, Taelyn, and Ava Jean Theisen, Obehili Aimuan, and Chloe Cremers.He was preceded in death by his wife Mary Lou Cremers who passed away in 2005, his parents John and Katherine Cremers, his half-brothers Lambert, Joseph, and Jerry Cremers, and his faithful dog Mac.

Funeral services celebrating the life of Elmer Al Bernard Cremers, age 90 of St. Cloud will be 11AM, Monday, April 30, 2012 at the Miller-Carlin Funeral Chapel in St. Cloud. Father Al Stangl will officiate, and burial will take place at the Minnesota State Veterans Cemetery following the service.