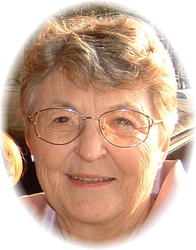 Memorial services celebrating the life of Dolores Marie Pokela, 87, of St. Cloud, MN, will be at 10:30 AM Friday, June 7, 2013 at St. Paul’s Catholic Church in St. Cloud. Father Al Stangl will officiate and burial will take place at a later date. Dolores passed away May 23, 2013, after a long struggle with Alzheimer’s. There will be a visitation after 9:30 AM on Friday, June 7, 2013 at the church. Arrangements are being made with the Miller-Carlin Funeral Home in St. Cloud.Dolores was born February 5, 1926, in Prentice, Wisc, the daughter of Mark and Grace (Hoffman) Curtis. Dolores married Arne Pokela, of Brantwood, Wisc, in 1944. Dolores was preceded in death by Arne in after 60 years of marriage. During World War II, Dolores worked in Chicago as a “Rosie the Riveter” prior to marrying Arne. She spent the next thirty years primarily raising her seven children, but also helped Arne with his insurance business for many years. Over the years, they lived in Prentice, WI; Two Harbors, MN; Sioux Falls, SD; and St. Cloud, MN. After raising her family, Dolores was the first woman to graduate from St. Cloud Technical College’s carpentry school in the mid-1970s. She loved theater, and volunteered on stage set construction, as well as on the Board, of the former County Stearns Theater. She also started and ran a number of small businesses. Dolores loved spending time with her many friends, especially playing bridge. Dolores and Arne loved to travel, attended many Elderhostels, and travelled abroad. They also spent many winters in Florida and Arizona, making many life-long friends wherever they went. Dolores & Arne raised a loving and close family of seven children: Tom (Darla) Pokela, Sioux Falls, SD; Christine (Bill) Schonning, Andover; Julie (Liz Denny) Pokela, Florence, MA; Beth (Tom Porter) Pokela, Buenos Aires, Arg.; Deb (John) Sheldon, Litchfield; Jim (Vicki Violet) Pokela, Anoka; and Barb (Berny Ackley) Pokela, Minneapolis. She was very proud of her 16 grandchildren and 12 great-grandchildren. She also leaves behind many beloved relatives and friends.Our matriarch was much loved and will be hugely missed. Donations preferred to the Multiple Sclerosis Society and Alzheimer’s Association.

Donations preferred to the Multiple Sclerosis Society and Alzheimers Association.

Chris,
Only heard of your mothers, and Bills passing. recently. So very sorry for your loss.
Ronn