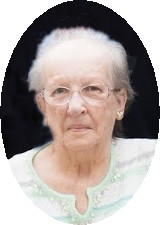 Mass of Christian Burial celebrating the life of Delores H. Rolfes, age 77, of Avon, will be at 11:00 AM on Wednesday, August 19, 2015 at the Seven Dolors Catholic Church in Albany and burial will take place in the parish cemetery.  Delores passed away at the St. Cloud Hospital early Monday morning.  There will be a visitation from 4:00-8:00 PM on Tuesday, August 18, 2015 at the Miller-Carlin Funeral Home in Albany and again at 9:45 AM on Wednesday at the funeral home.  Parish prayers will be at 4:00 PM Tuesday evening at the funeral home.  Arrangements are being made with Miller-Carlin Funeral Home of Albany.

Delores was born on May 6, 1938 to George and Loretta (Heim) Berg in Sauk Centre.  She moved to Sartell at the age of five and grew up with three siblings.  Delores married Andrew Rolfes on September 5, 1960 and they welcomed 5 children to complete their family.  She always kept herself busy, actively helped Andy side a barn, climbing ladders, shingling a roof and splitting logs despite her small stature.  Delores earned her GED while her own children were in school and had a goal of obtaining her driver’s license, which she did when she was 50 years young.  Andy and she enjoyed visiting the casino, traveling to different parts of the country, especially into the southern states, and they visited Nashville a number of times.  Her children remembered fondly all the great food they enjoyed as a family: dressing, potato salad, roast beef, chicken, lasagna, fried cabbage, mashed potatoes, bologna, and rhubarb custard pie.  Gardening, canning, and making their own sausage were hobbies she enjoyed with Andy.  She loved day-long bonfires and spending the holidays with family.  Their tradition was to have Andy bake the Christmas cookies, she’d make the frosting, and the kids and grandkids would frost them.  Delores loved country music, listening to the radio, and especially enjoyed Hee-Haw.  She was also a collector of different kinds of birds: owls, roosters, cardinals, and chickens.  After living for many years with severe pain, Delores was diagnosed with Paraneoplastic Syndrome, an auto-immune reaction of the nervous system, and with small-cell lung cancer in February of 2008.  Being the fighter that she was, she entered remission that July.  Her body fought for as long as it could; now she is at peace and can finally rest.  Delores was a member of Seven Dolors Catholic Church in Albany.

She is greeted in Heaven by her parents George and Loretta Berg.

The family would like to thank the nursing staff at Assumption Nursing  Home for their kindness, support, and compassionate care over the past three years.