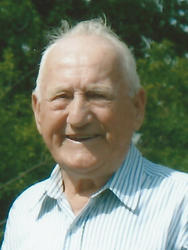 Cyril was born June 24, 1922 in Opole to Frank and Agnes (Philipsek) Kuklok.  He married Bridget Kociemba and the couple raised six children together.  Cyril farmed and worked at Franklin Manufacturing for over 37 years.  Cyril enjoyed spending time with his family, going to auctions, collecting International tractors, and making woodworking projects. He also enjoyed sharing his stories with family and friends.  Bridget passed away in 1979.  He married June (Dunham) Grabmeier on February 28, 1982.

Cyril is preceded in death by his parents, his first wife, Bridget; two infant sons, his step-daughter, Sharon Grabmeier, his brothers, Alex Kuklok and Benedict Kuklok, and his sister Hilda Karnes.

The family would like to thank Dr. Lalley and the Hospice workers who took care of Cyril.

The Mass of Christian Burial celebrating the life of Cyril J. Kuklok, age 95 of Opole will be 11:00 AM, Monday, December 11 at Our Lady of Mount Carmel Catholic Church in Opole. Burial will be in the parish cemetery.