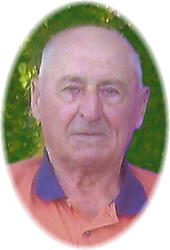 The Mass of Christian Burial celebrating the life of Clem Jonas, age 85 of St. Anna, will be 11:00 AM, Monday, October 27 at the Immaculate Conception Catholic Church in St. Anna.  Burial will be in the parish cemetery.  Clem died Friday at Quiet Oaks Hospice House in St. Cloud.  There will be a visitation from 4-8:00 PM Sunday and again after 9:30 Monday at the Miller-Carlin Funeral Home in Albany.  Immaculate Conception parish prayers will be at 7:00 PM Sunday at the funeral home in Albany.

Clem was born September 18, 1929 in St. Martin to Edward and Theckla (Winter) Jonas.  He married Eileen Maritsch on July 10, 1952 in New Munich.  The couple farmed in St. Martin for 10 years before moving to St. Anna in the spring of 1963.  He owned his own farm, only recently retiring.  Eileen died November 14, 2001.  Clem is a member of Immaculate Conception Catholic Church and the Knights of Columbus.

Clem is preceded in death by his parents, his wife, Eileen and his sister, Ellen Hommerding.

To Clem’s Family I offer my deepest sympathy at his passing, which comes as a complete shock.  Clem was just the best neighbor on Two Rivers.  I will miss the conversations we had whether over a plate of cookies or sitting on his golf cart visiting.  He was just the nicest guy who had a huge pride for his family and wasn’t afraid to say it.  He dealt with his medical situation without complaint and just kept foraging ahead in spite of the road blocks and this always impressed me immensely.  I will miss my friend more than I can even say and so will my family, who always asked me on each visit if I had seen Clem and how he was doing.  I wish so much that I could be with your family for his celebration of life but that is just not possible.  However I will be with you in thought, prayer and spirit and will ask that God always Bless the Jonas Family. Rest in peace Mr. Clem.