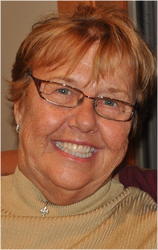 Mass of Christian burial celebrating the life of Carolyn “Carrie” Lucille Sand, age 69 of St. Cloud will be 11AM, Thursday November 15th,  2012 at Holy Spirit Catholic Church in St. Cloud.  Father Eberhard Schefers will officiate and a private burial will take place at Assumption Cemetery at a later date.  Carrie died peacefully in her home surrounded by her loving family on November 9th after losing her three and a half year battle with pancreatic cancer.  There will be a visitation from 4-8PM Wednesday, November 14th, at the Miller-Carlin Funeral Home in St. Cloud and again from 10AM until the time of the service Thursday morning at Holy Spirit Catholic Church.  Parish prayers will take place at 6 PM Wednesday evening at the funeral home.  Arrangements are being made with the Miller-Carlin Funeral Home of St. Cloud.Carrie was born just moments after her twin sister Mari on November 7, 1943 in Roscoe MN to Alphons and Veronica (Heinen) Schefers.  She married Syl Sand on October 10, 1964 at St. Agnes Catholic Church in Roscoe MN.  They settled in St. Cloud where they raised four daughters; Deborah, Deanne, Tracey, and Tonya.Carrie was known for her smile, her outgoing personality, and her hospitality.  There was always room at the kitchen counter for family and friends who wanted to visit.  She was a member of St. Michael’s Catholic Church and later joined Holy Spirit Catholic Church when she and Syl moved into their new neighborhood.  She enjoyed traveling, playing tennis, being with her many friends, and spending time at their cabin near Richmond.  She was happiest when she was with her 10 grandchildren. She looked forward to their annual vacation to Quadna where she loved the family being together.  She loved to watch the sunset at the end of the day.  She would hold hands with one or more of her grandchildren and tell them that if they ever needed to talk to her they could find her in the sunset.She is survived by her husband, Syl, St. Cloud; her children, Deb (Tom) Heile of Prior Lake, Dee (Dave) Johnson of Paynesville, Tracey (Rich) Belmont of Eau Claire, WI and Tonya (Artie) Huber of Otsego; her 10 grandchildren Ella, Sara, Jack, Michael, Elizabeth, Kaitlyn, Eric, Luke, Ryan, and Andy; her twin sister Mari (Art) Schloeder; her brothers Hubert (Joan) Schefers;  and Orville (Char) Schefers; and many friends.She was preceded in death by her parents, her infant sister Marie, and her brother Charles.

There will be a visitation from 4-8PM Wednesday, November 14th, at the Miller-Carlin Funeral Home in St. Cloud and again from 10AM until the time of the service Thursday morning at Holy Spirit Catholic Church. Parish prayers will take place at 6 PM Wednesday evening at the funeral home.

A loving Mother, Wife and Friend who will be sadly missed but we will remember her with many memories

I don’t have words right now..I will miss her, I am so fortunate to have known Carrie for so many years, as a friend,neighbor,functions at St. Michael’s, tennis,walking partner with Dianne, birthday lunches, up north, and a wonderful person to listen to my stories and we would both laugh so hard..I love you Carrie, I will remember the good times.. Love and Hugs and Sympathy to the wonderful family of Carrie!

Friend forever in God’s kingdom. Carrie loved her family and cared for friends. She will be missed forever and I will have many conversations with her in the coming months.

She is at peace now and I’m so sorry I will miss her “going away party”, but that’s the way it is and I’ll be in contact with Mari after Thanksgiving. May her family find peace and comfort in the Lord and look forward to that great reunion some day!

A legacy was left through such a wonderful woman (we barely knew, but is exuberant in her daughter Tonya’s life)!

Dear Syl and the entire family ~
We were so very sorry to hear of Carrie’s passing. Although we knew the time would come, it is always much too soon. We were so happy to have been able to meet her and spend time with the family during their annual weeks at Quadna, which we know always went by too quickly. She so enjoyed that time when the whole family was together and it showed with her beautiful smile and always enough hugs to go around. We send our love and deepest sympathy to all of you and hope that the comfort of warm memories will bring you peace in the days to come. We hope we will see you again at Quadna in future summers. Thinking of you at this sad time ~
Dianne and Tom ([email protected]

Dear Dee and Family,
I am so sad for your loss! Keep the memories alive each day and hold each other tight! Your mom was an amazing woman and you should feel so fortunate!
Peace!