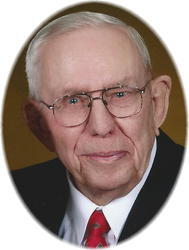 Bernie was born April 11, 1924 at home in Waite Park to Arthur and Stella (Luehmann) Hinz.  He grew up in St. Cloud and Fairhaven Area, attending various country schools.  He received his GED as an adult and later graduated from Drew’s Business  College in St. Cloud.  Bernie served his country during WWII in the U.S. Navy from 1944-1946.  He was aboard the USS Stanley DD478 in the Pacific Theater.  He married the love of his life, Roberta E. Tritabaugh, on November 11, 1947; the couple just celebrated 67 years of marriage.  Bernie worked various jobs.  In 1961, he & Roberta bought a farm and began raising chickens in Fair Haven Township, making it their home for over 50 years.  While on the farm, he also worked at the VA Hospital in St. Cloud, retiring in 1984 with 20 years of federal service.  Bernie was baptized, confirmed and a current member of Holy Cross Lutheran Church, serving on various boards; a past member of Concordia Lutheran Church in Fair Haven, serving on many boards; a Fair Haven Township Supervisor and election judge for Fair Haven Township; a member of the Fair Haven Lions Club where he received the Melvin Jones Award, and a member of the South Haven VFW.  Bernie also played Santa Claus in Fair Haven.

Bernie and Roberta traveled throughout the United States and Canada.  When he retired, they traveled to England, the British Isles, and to the Holy Lands.  In 2009, he traveled on a Veterans Honor Flight to Washington, DC to see the WWII Memorial.

Bernie is preceded in death by his parents, his sister Evelyn Tritabaugh; niece Judy Tritabaugh; daughter-in-law Sandy Hinz; and brothers-in-law and sisters-in-law.

Memorials are preferred to the donor’s choice.

Memorials are preferred to the donor’s choice.

RIP, Uncle Bernie.  You will be missed because you were always fun.

You will be missed and you were always fun to be around.

Bernie and Roberta were our friends at Holy Cross Church. We miss seeing him at church, as do many, many people from Holy Cross.  Our sympathies to Roberta, and to the Hinnz family.