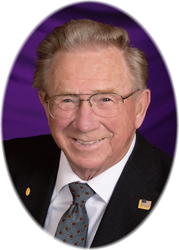 Services celebrating the life of Will Haberle, 91, Saint Cloud, will be at 11:00 AM on Monday, August 15, 2016 at the First United Methodist Church, Sartell.  Pastor Leah Rosso will officiate.  There will be a graveside gathering at 11:00 AM on Tuesday, August 16 at the Rosemound Cemetery in Barnesville, MN.  The family will welcome visitors one hour prior to services Monday morning at church.  Will passed away peacefully early Thursday morning at Quiet Oaks Hospice House, as were his wishes, after a sudden illness.

Will was born on August 8, 1925 to William and Sophie (Wulff) Haberle in Barnesville.  He was the youngest of seven children raised on the family farm and graduated from Barnsville High School in 1941.  He entered the military service in 1944 at 19 years old and proudly served his country in the US Army.  Will attained the rank of Sergeant and was stationed in the Philippine Islands and Japan before being honorably discharged in Nov. of 1946.  After leaving the military, he attended Interstate Business College in Fargo, ND until his first employment with the City of Fargo in 1948.  Will was married on Sept. 26, 1948 to Evelyn J. Motschenbacher.  During that marriage, two children were proudly adopted.  They lived in the Fargo-Moorehead area until being transferred to Minneapolis in December of 1959.  He resided there until retiring to his home on Lake Mille Lacs in 1992.  After his divorce in 1970, Will remarried Sybil Richter of Brooklyn Center on Oct. 21, 1971.  Will had many hobbies and enjoyed hunting, fishing, camping, golfing, dancing, and wood working.  On Sept. 29, 2001 Will married Betty J. Werckman of Foley.  They purchased a home in St. Cloud and he made his final move in 2002.  Will was a procurement specialist for AmClyde until he retired. He was a lifetime member of the VFW Post 428 and Disabled American Veterans.  Will was also a member of the  American Legion Post 428, the Fraternal Order of the Eagles Aerie 622 in St. Cloud, and an active member of the First United Methodist Church in Sartell.

Will is survived by his children Charles Haberle of Plymouth and Cheri (David) Manarin of Otsego; two grandchildren; four great-grandchildren; his stepchildren and their families Judy Richter, Brenda Werckman-Jones, Brian (Terri) Werckman, Bryce (Stephanie) Werckman, Barbara (Emory) Safford; his special grandpuppy Izzie the shih tzu, as well as many other family and friends.

He is greeted in Heaven by his wife Betty Werckman, who passed away Nov. 28, 2015, his parents William and Sophie Haberle, his siblings Arthur Haberle, Ralph Haberle, Frances Ahlfs, his half siblings Albertina Kieselbach, Edna Wyland, and Emil Gerbing, his first wife Evelyn, and his second wife Sybil.

Will’s family would like to express their heartfelt gratitude to Quiet Oaks Hospice House for their gentle and compassionate care.  He felt so comfortable there during Betty’s stay; he became a part of their community by visiting and volunteering over the past few months.

Visitation will be at10:00 AM on Monday, August 15, 2016 at the First United Methodist Church in Sartell.