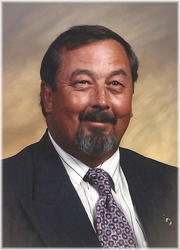 Funeral Services celebrating the life of William “Bill” P. Weber, age 67, of Freeport will be 11 AM, Saturday, January 28th, 2012 at Glendorado Lutheran Church in Princeton, MN.  Reverend Barb Peterson will officiate, and burial will take place in the parish cemetery at a later date.  Bill died peacefully in his home surrounded by his family Tuesday afternoon.  There will be a visitation from 10 AM until the time of the service at the church Saturday morning.  Arrangements are being made with the Miller-Carlin Funeral Home in Albany.Bill was born October 1, 1944 to Ricks and Mary (Brennan) Weber in LeMars, IA.  He grew up in LeMars where he lived until joining the Marines.  After his safe return from duty in Vietnam he married Doris Carter on May 6, 1967 in Las Vegas.  After marriage the couple lived in Inglewood, CA.  In 1968 they moved to Merrill, IA where they lived until 1975 when they moved to Motley.  In 1987, they moved to the central Minnesota area living in Foley and Glendorado.  In 2008, they moved to Tyler, MN where they lived until Bill fell ill and then moved to Freeport.  Bill worked his life as a carpenter most recently working for Xcel Energy until his retirement in 2006.  He was a member of First Lutheran Church in Sauk Centre, the Merrill, IA American Legion, the Princeton VFW, and the Carpenters and Joiners Local Mpls 322.Bill is survived by his wife Doris Weber, Freeport; his daughters Lisa (Gordon) Hocking, St. Cloud; Lana Weber, Freeport; Lynette (Don) Franklin, St. Cloud; Rose (Nate) Rosebear, Ponemah, MN; Nancy Weber, Foley; his 12 grandchildren and 4 great-grandchildren.He is preceded in death by his parents Ricks and Mary Weber, and his siblings Mary Laddasaw, Katherine Bolton, Dora Weber, Viola Rieken, Bernice McKay, Hank Weber, and Alvin Weber.

Funeral Services celebrating the life of William Bill P. Weber, age 67, of Freeport will be 11 AM, Saturday, January 28th, 2012 at Glendorado Lutheran Church in Princeton, MN. Reverend Barb Peterson will officiate, and burial will take place in the parish cemetery at a later date.

hey Grandpa, I know you may not be able to see this, but i know you can see me and your watching over me. I love you alot grandpa and ur stories they would really interest me. You told me i was your little Prussian girl, and i went to school and told everyone because i was so proud to be. You were such a strong man. i’d never thought you would be gone. Honestly it still feels like you are here i think im still in shock. Everyone could see you were hurt and you told us about it. I’ll always remember you and you will be in all our family’s hearts. love, nicole nate and quentin! and also your daughter Lynetter my mom! she misses you the most, please watch over her and help her get through this and stay tough like you would want all of us to be.

Doris…All our prayers and thoughts are with you and all those who loved Bill. No words can ease the sadness which surrounds you, but know that you will be given the peace of our Lord and the comfort of His Spirit. Blessings and love, Ron & Mary Jo

Pastor Doris and Family,
My thoughts and prayers are with you during this time. Bill was a great man and I am sure he is up in heaven cracking jokes with everyone. I can only imagine the pain you are feeling right now, but know that so many people care about you and are here for you as you need them.
Love,
The Hanson Family

Sis,There are no words to say what we feel at a time like this. Bill was loved by all who knew him. My paryers are with you and your family at this time.We wil miss him. Wish I could be there for you.But my heart is Love you Bonnie

We share your sorrow, Doris and family. God is good to have placed Bill in our lives and now heaven rejoces as he has come home.
We leave for Mexico Sat. morning, so cannot be with you then but will keep you in our prayers.
Sandy Miller and family

Pastor Doris & Family There is nothing we can say but we are so sorry for your loss. We are glad we got to spend the time we did with you and Bill. We will keep you and your family in our prayers. Do keep us posted. We are not that far away. Give us a call if you need to talk Blessings, Love You, Jan & Sherm

Doris and Family, I am sorry about Bill, I remember he fondly. I will be praying for you during this time. Remember, that being absent from the body is to be present with the Lord, in Christs love, the Conley’s in Le Mars, Iowa

I am so sorry Sissy to hear of Bill’s passing. He will be sorely missed. Our thoughts and prayers are with you.

Doris, our thoughts and prayers are with you. Wonderful service today. Be sure and contact us when you can — so we can have coffee or what ever. Love to show you the CROSS Center too.