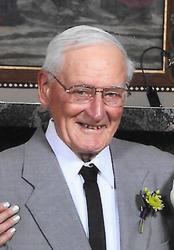 Wally was born February 18,1923 in Minneapolis to Alfred and Ann (Johnson) Jacobson. He grew up in Minneapolis and graduated from North High School where he was a gymnast and his team went to state his senior year.  He was  a WWII veteran, serving in the U.S. Navy from 1942 until his honorable discharge in 1945. Wally married Eleanor Stegura on October 17, 1944 in Minneapolis. The two lived in Minneapolis until 1981 when they retired and moved to the Avon area.  He worked as a tree trimmer for NSP for over 28 years. Wally was a proud member of the International Brotherhood of Electrical Workers (IBEW) 160.  Wally enjoyed living at the lake with his neighbors; he loved tending his gardens and his refrigerator was always covered with family pictures.

Wally is preceded in death by his parents and his wife, Eleanor on April 29, 2007.

Wally’s family would like to thank his neighbors for their friendship and love.

Service to honor the life of Wallace A. Jacobson, age 94 of Avon, will be 11:00 AM, Monday, November 6, at the Miller-Carlin Funeral Home in Holdingford. Burial will be in the Minnesota State Veterans Cemetery in Little Falls.