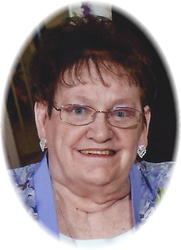 Mass of Christian Burial celebrating the life of Virginia Thelen, age 75, of Sartell, will be at 11:00 AM on Saturday, January 9, 2016 at the Church of St. Martin Catholic Church in St. Martin.  Fr. Edward Vebelun, OSB will officiate and burial will follow in the parish cemetery.  Virginia passed away peacefully late Tuesday evening with her daughters at her side at Country Manor Nursing Home in Sartell.  There will be a visitation for family and friends from 5:00-8:00 PM on Friday, January 8, 2016 at the Miller-Carlin Funeral Home in Albany and again after 10:00 AM Saturday morning at the church in St. Martin.  Arrangements are being made with Miller-Carlin Funeral Home, Albany.

Virginia was born on March 2, 1940 to Joseph and Anna (Haehn) Thelen on the family farm in St. Martin.  She grew up with eight siblings and attended a one-room schoolhouse.  On June 20, 1960 she married Bernard Lass and together they raised five children; they later divorced.  Virginia was known for her creative and artistic abilities.  She enjoyed crocheting, tatting, drawing, and other crafts.  Virginia also liked to sew and would make clothes, even formal dresses for her daughters.  She liked growing flowers and gardening, as well as baking and decorating cakes.  Virginia was a self-taught pianist who could play most anything by ear.  She called Country Manor her home for the past 20 years and took part in various activities; she especially enjoyed putting together puzzles, playing cards, and bingo.

She is preceded in death by her parents Joseph and Anna, her daughter Stacy (Lass) Hagemeister, her brothers Robert Thelen, Fred Thelen, Leon Thelen, and Cliff Thelen.

There will be a visitation for family and friends from 5:00-8:00 PM on Friday, January 8, 2016 at the Miller-Carlin Funeral Home in Albany and again after 10:00 AM until the time of service Saturday morning at the church in St. Martin.