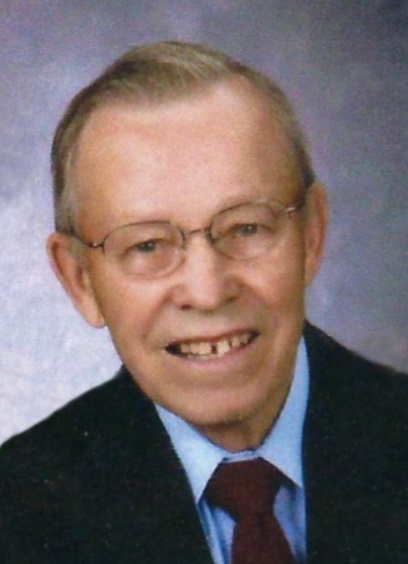 Mass of Christian Burial celebrating the life of Virgil N. Gruenke, age 94, of Albany will be 10:00 AM, Saturday, August 10th at Seven Dolors Catholic Church in Albany.   Burial with full military honors will be in the parish cemetery. There will be a visitation from 4-8:00 PM Friday and again after 9:00 AM, Saturday at the Seven Dolors Gathering Space.  Seven Dolors parish prayers will be at 4:00 PM, Friday at the church.

Virgil passed away peacefully on August 7th, 2019 at Mother of Mercy Nursing Home in Albany, the same town in which he was born on June 1st, 1925 to Anton Sr. and Frances (Kalla) Gruenke.  He was the ninth of 13 siblings and grew up in Albany helping with his father’s poultry business.  He was an active Boy Scout and excelled at Albany High School where he was a state-licensed boxer on the school team and a quarterback on the football team where he set school records that stood for many years.  He entered military service during WWII and served in the South Pacific on the Navy destroyer USS Taylor.  He was present at the signing of the peace treaty with Japan that ended the war when his ship escorted the USS Missouri into Tokyo Bay for the treaty-signing ceremony.  Upon his honorable discharge from the navy, Virgil returned to Albany to finish high school and then continued his education at the University of Minnesota, earning a degree in Animal Husbandry with a specialty in poultry science.  After working for a time at Stone’s Poultry Farm near Madelia, Minnesota, he again returned to Albany to own and operate the Albany Feed Elevator and Hatchery.

He married Joan Reller on August 2nd, 1958, a day he forever-after proudly proclaimed as the greatest day of his life.  They made their home and raised a family in Albany where Virgil continued to operate his business which eventually developed into Albany Hatchery and Poultry Farm.  In 1972 he also took on employment with the Albany School District, working on summer maintenance projects and driving a school bus–a position he continued with for 40 years.  In 1961 he helped establish the Albany Golf Club, personally hand-building a number of the greens.  A man of deep faith and with a strong sense of civic duty, Virgil was an active member of Seven Dolors Parish and involved with numerous community organizations, including the Albany American Legion Post 782, where he served as commander.

Virgil had a great sense of humor and absolutely loved a good joke which he always told with his irrepressible little smirk that let everyone know a punch line was coming and that it was all in good fun.  He often thrived on entertaining others and participated in many parades as part of various clown acts with his cousins and friends.  He was an avid golfer well into his 80’s and enjoyed attending local sporting events.  Watching golf and the Minnesota Vikings on television–especially during the Bud Grant era–were other favorite pastimes.

He was preceded in death by his parents and by siblings Harry, Viola, Hortense, Alfred, Eleanor, Werner, Delores, Gumpert, Pirmin, and Ruth.

Arrangements have been entrusted to the Miller-Carlin Funeral Home of Albany.

There will be a visitation from 4-8:00 PM Friday and again after 9:00 AM, Saturday at the Seven Dolors Gathering Space.  Seven Dolors parish prayers will be at 4:00 PM, Friday at the church.

Mass of Christian Burial celebrating the life of Virgil N. Gruenke, age 94, of Albany will be 10:00 AM, Saturday, August 8th at Seven Dolors Catholic Church in Albany.