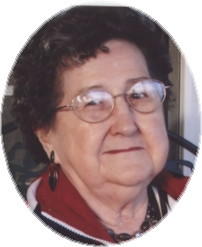 There will be a memorial gathering Tuesday night August 14th  from 5-7pm at the Miller-Carlin Funeral Home in Saint Cloud for Victoria Simek, age 91 of Sauk Rapids.  Victoria passed away peacefully Friday, August 10 at Good Shepherd Nursing home. There will be a second visitation Sunday August 19th with Clark Funeral Home in Neosho Missouri with funeral services following the next day. Arrangements are being made with Miller-Carlin Funeral Home of Saint Cloud.Victoria was born in 1921 to Mattis and Annie (Piecek) Cizler in Petersburg, Virginia. She married  Leonard on February 14th in 1947 in Chicago.  The couple moved to Neosho MO in 1960 and later Victoria moved to Sauk Rapids.  Victoria was  a homemaker and took care of her two children.She is survived by son, Leonard Jr. (Sharon) Simek, Neosho, MO; daughter Joyce (Dave) Schoonover, St. Cloud; sister, Catherine Benda; brother, Mike Cizler; 6 grandchildren and 10 great grandchildren.  She is preceded in death by her parents, husband Leonard, half sister, Barbra Garvie and a great grandson.

There will be a memorial gathering Tuesday night August 14th from 5-7pm at the Miller-Carlin Funeral Home in Saint Cloud.

The Cizler family expresses our deepest sympathy over the loss of Mike’s sister and Janice and Cheryl’s Aunt Vicki. We have very fond memories. Our thoughts and hearts are with Joyce, Len and their families.

ON BEHALF OF AUNTIE CATHERINE, AND HER FAMILY, PLEASE ACCEPT OUR DEEPEST SYMPATHY ON THE LOSS OF YOUR MOTHER. MY SISTER, MY FRIEND.