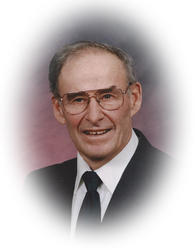 The mass of Christian burial, celebrating the life of Victor J. Euteneuer, age 89 of Holdingford, will be 11:00 AM, Tuesday, June 23 at Church of All Saints, St. Mary in Holdingford.  Burial will be in the parish cemetery. Victor died Thursday at the Mother of Mercy nursing home in Albany.  There will be a visitation from 10:00 AM until the time of service, Tuesday at the church in Holdingford.  Arrangements are being made by the Miller-Carlin Funeral Home.

Victor was born October 18, 1925 in Holding Township to  Henry and Mary (Ricker) Euteneuer.  He lived his entire life on the family farm.  He married Bernice Lashinski on September 13, 1949 in St Stanislaus Catholic Church in Sobieski. The couple farmed together on the family farm.   Victor was Past Grand Knight of the Knights of Columbus, he was Fraternal Secretary for Catholic Aid, he was on the Creamery board, he was a trustee for St. Mary’s Catholic Church in Holdingford for 33 years and he was the Sexton for the St. Mary’s Cemetery.  He was a member of the Church of All Saints, St. Mary in Holdingford.

The Visitation for Victor Euteneuer will be from 10:00 AM Tuesday until the time of the service at the church in Holdingford

The Mass of Christian Burial will be 11:00, Tuesday, June 23 at Church of All Saints, St Mary in Holdingford, MN

My thoughts and prayers are with Tom and Patty and the rest of the family for your loss. As Victor’s dental hygienist, I always enjoyed the talks about the daily hard work on the farm, the good help the large family of children provided and talks about life lessons.  Victor was always in good spirits and was a joy to work with!  Victor, your great character will be missed. May Heaven welcome you.

My thoughts and prayers are with you.  I especially enjoyed doing First Friday visits with Victor.

Dear Mary & the rest of the Eureneuer clan,

I am so very sorry for the loss of your loving father. May you all find peace knowing he is at peace.