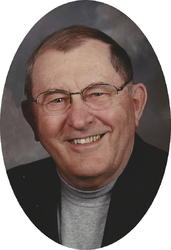 Mass of Christian Burial, celebrating the life of Vernon “EP” J. Dockendorf, age 85 of St. Cloud will be 12:00 Noon, Wednesday, October 15, at the St. Benedicts Senior Community Chapel.  Burial will be in St. Boniface Cemetery in Cold Spring.   Vern died Saturday at the St. Cloud Hospital.  There will be a visitation after 11:00 AM Wednesday at the Chapel.  Arrangements are being made by the Miller-Carlin Funeral Home in St. Cloud.

Vern was born March 1, 1929 in Cold Spring to Paul and Ann (Faber) Dockendorf.  He grew up in Cold Spring and entered the U.S. Army after high school.  After his discharge, he moved to St. Cloud and attended the St Cloud School of Business.  Vern married Arlene Wicker on May 15, 1952 in Pearl Lake.  He worked for McGarry Buick and then began his career as an accountant with Northern States Power Company.  Vern worked in the payroll department with NSP for over 32 years, retiring in 1988.  He was a member of the Waite Park American Legion and the St. Cloud Eagles Aerie 622.

He is preceded in death by his parents, an infant son, and brothers, Roman Dockendorf and James Dockendorf.

Memorials are preferred to the Poor Clares

Memorials are preferred to the Poor Clares