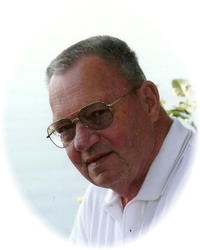 Tom was born August 8, 1931 in Stearns  County to John and Helen (Meyer) Jacobs.  He started working for the railroad in 1952, before being called into the U.S. Army.  After his honorable discharge, Tom returned to Clearwater and continued working for the railroad as an engineer until he retired in 1992.  Tom married Mildred Helget on June 4, 1954 in Clearwater, the couple had 8 children.  Mildred died in September of 2005.  Tom married Judy Hitter Cotton in August of 2007 and the couple moved to Sturgeon Lake.  Tom served as mayor of Clearwater from 1958-1962, during the building of the Highway 24 bridge across the Mississippi and Tom cut the ribbon during the opening ceremony of that bridge.  He also sold and installed cemetery markers for many years.    Tom was a member of St. Luke’s Catholic Church in Clearwater and the Railroad workers union.Tom is survived by his wife, Judy Jacobs, Sturgeon Lake; his children, John (LuWann) Jacobs, Annandale; Michael (Mary Linn) Clearwater; Patricia (Bob) Imholte, Cold Spring; Daniel Jacobs, South Haven; Karen (Jerry) Marzahan, Waterville, MN; Mark (Sheila) Jacobs, Clearwater; Paul (Shelly) Jacobs, Rice; Bryan Cotton, Sturgeon Lake, Kari Resch, Boyne City, MI; Amy (Scott) Arnstson, Duluth;  brother, Leo Jacobs, Clearwater, and his sister-in-law, Virginia Jacobs, Waite Park.  Tom is also survived by 22 grandchildren and 12 great-grandchildren.Tom is preceded in death by his parents, his first wife, Mildred, his son,  Eugene in 1955 and his brother, Loyal Jacobs.

Tom and my husband, his cousin Jim Meyer, both died on the same day….May 17, 2012! Feast of the Ascension of Jesus! We mourn their loss but rejoice that they are in Heaven where we’ll all be reunited one day. We have our memories and their love to sustain us. May they rest in the peace of the Lord!