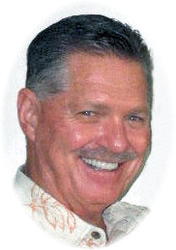 Thomas Patrick Costello, age 61  passed away at St. Michaels Hospital in Sauk Centre on October 23rd, 2011, due to complications related to an injury.Thomas was born December 30th, 1949 in Richland, WA to Donald and Alice (Trumble) Costello.  He married Linda McElrone on 10/26/1968 in California.  Tom was in the industrial chemical business for most of his career.  He retired in 1997 and enjoyed living in Maui (sitting on the beach almost daily) and traveling the country in a motor coach for the last few years.   He was a loving husband, father, grandfather and friend.  He will leave behind many fun and loving memories.Tom is survived by his wife of 43 years Linda Costello; his son Kevin and daughter-in-law Ann (Matchinsky) Costello from Big Birch Lake near Grey Eagle, daughter Kari and son-in-law Chris Hardy from Gilbert Arizona, and five grand children, Scott (13), Lea (10), John Thomas (6), Madeline (1) and Macy (4 months).Funeral services will be held in Arizona at a later date.

Memorials are preferred in lieu of flowers to either the Arthritis Foundation (www.arthritis.org) or the Spondylitis Assosciation (www.spondylitis.org).

What a horriable tragedy! I know how fast your life can change. I ‘m so sorry for your loss and will be praying for your family.

I was incredibly saddened to hear of Tom’s passing. I and many others were inspired by his spirit and never-ending optimism. My deepest condolences to Linda, and all Tom’s wonderful family. You all left a lasting impression on not only myself, but everyone who had the pleasure of interacting with Tom. My thoughts and prayers are with your entire family during this incredibly difficult time. I’m glad to have had the pleasure of meeting Tom, and your family, and I will forever remember his incredible attitude. What a wonderful man. God bless you all.
Amanda P. – St. Cloud Hospital

I had the pleasure of knowing Mr. Costello as I work at the condo that Mr. and Mrs. Costello own on Maui. He was a genuine person and will be missed here at The Whaler. We all will be praying for Mrs. Costello and their family.

We had the pleasure of being friends with Tom and Linda since High School. We double-dated throughout high school almost every weekend. Tom was a very unique individual and always made us laugh. We are heartbroken. We are praying for Linda and her family. We will never forget Tom……