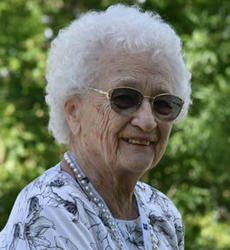 Theresa was born April 23, 1928 in Krain Township to Herman and Rose (Thell) Beuning.  She married Henry Roerick on August 27, 1946 in St. Francis.  The couple settled in Albany where they raised 7 children.  Theresa worked for the Albany Area Schools for 10 years.  She is a member of the Seven Dolors Catholic Church, Seven Dolors Christian Women, the Knights of Columbus Auxiliary, and she was actively involved with the Albany North Stars 4-H club.

She is preceded in death by her parents, her husband, Henry on May 26, 1995, an infant daughter, her sister, Dorothy Wald, brothers, Victor Beuning,  Walter Beuning, Norbert Beuning, Tony Beuning and close companion, Melvin Muyres.

i was very sorry to hear of Theresa passing.  I have been thinking of her this winter. I know my mom is very excited to have her in heaven, they were such good friends as well as sisters.  I am sorry I cannot make it to the funeral as we have company here in Montana, I will miss seeing all of you.  You are all in my prayers and thoughts during this difficult time

Love to you all.  Carol Boyum

Theresa was a kind woman! I always enjoyed seeing them and visiting. Henry and her were so caring! We wish Theresa and Henry eternal glory and we wish the Family the peace only God can provide. We were blessed to have known them both!

My deepest sympathies to the family and friends. I know the death of a loved one can leave one feeling helpless and hopeless. But our heavenly Father has given us reasons to rejoice. He has promised to swallow up death forever. (Isaiah 25:8). At Revelation 21:3, 4 he has also promised to do away with all things that cause one to mourn or cry out in pain. All tears will be wiped away even death will become a thing of the past that will never to be brought to mind again. He also offers the hope of a resurrection of those who have died. (John 5:28, 29) Just think, you have the opportunity of seeing your loved one again.  Just knowing of these promises can give a measure of comfort when one is grieving.