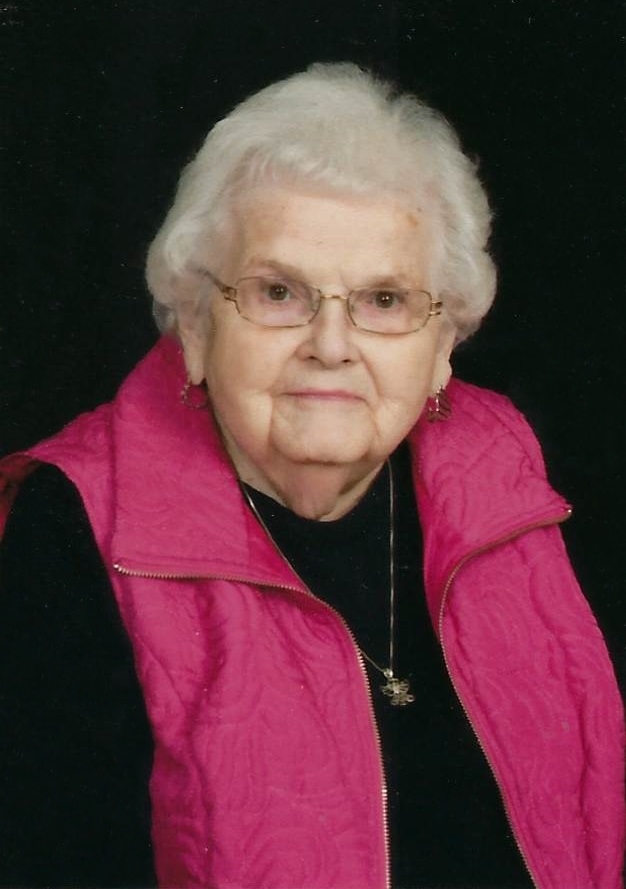 Theresa B. (Ludwig) Evens passed away surrounded by her children on April 30,, 2020, at the age of 92. She was born to Henry and Stella (Keppers) Ludwig on April 19, 1928, and was one of 7 children. At the age of two, Theresa lost her mother, at which time her father married Marie Keppers. That union brought three more siblings to the Ludwig family.

Theresa married Jerry Evens on May 6, 1950. After a stint in the Army, Jerry and Theresa returned to Albany and had four children.

Theresa was employed by Mother of Mercy of Campus of Care for over 35 years. She was awarded the ‘Minnesota Caregiver of the Year’ award for District D, in 1991. She was also awarded ‘The Diocese of St. Cloud Bishop’s Medal of Merit’ that same year.

Jerry and Theresa were avid collectors of Red Wing Stoneware and pottery and enjoyed traveling to auctions and Red Wing conventions. In recent years, Theresa commented that her life consisted of three C’s: Church, Crocheting, and Cards. She was an avid (and ruthless) player of 500, and crocheted over 350 prayer shawls for her community. Theresa had great wit and an easy smile. For her, there truly was no place like home.

She was preceded in death by her spouse, Jerry, her father Henry, mothers Stella and Marie, brothers George, Francis, Vincent and John, sisters Lucy, Rita and Margaret, and daughter in law Deborah.

She was a member of Seven Dolors Catholic Church, the Christian Mothers Society, the Albany American Legion Auxiliary , and the Red Wing Collector’s Society.

Theresa’s family would like to thank the dedicated staff of Albany Centra Care Clinic, Mother of Mercy Assisted Living, and CHI Health at Home for the wonderful care they gave her.

Whether you remember Mom for a kind word she spoke, the care she gave to your loved one during her 35 years of service at Mother of Mercy, a shared laugh, or a cordial greeting around town, we hope that you too remember her with a sense of Joy.

After the restrictions have been removed, a visitation and a memorial mass will take place at Seven Dolors Catholic Church in Albany.

Due to the COVID-19 pandemic a memorial service celebrating Theresa’s life will be at a later date.

Due to the COVID-19 pandemic a memorial service celebrating Theresa’s life will be at a later date.

Theresa, your amazing and beautiful Prayer Shawls will forever be a memory for me…thank you! May you Rest In Peace, be joined by many smiling faces and be an angel to protect your family from above 👼🏼 💞

Theresa had such a wonderful sense of humor! She will be missed

She was such a nice lady. Very good friend to my mom. My deepest sympathy to all. Now her andmom can play cards in heaven.

Godspeed to your family. My thoughts and prayers are with everyone during this solemn time.

To the Ludwig Family.Our sincere condolences. Our thoughts & prayers are with you all.

Theresa RIP , I am so blessed to have known her. I met her playing cards in Albany Senior Center. She so enjoyed playing 500 win or lose she had fun. My Sympathies you all see will be missed.