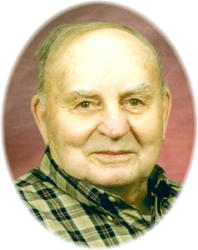 The Mass of Christian Burial, celebrating the life of Theodore “Teddy” Czech, age 93 of Holdingford, will be 11:00 AM, Thursday, April 18 at Church of All Saints – St. Hedwig in Holdingford. Burial will be in the parish cemetery. Teddy died Friday at the Mother of Mercy Nursing Home in Albany. There will be a visitation from 4-9:00 PM, Wednesday and again after 10:00 AM Thursday at the church in Holdingford. St. Hedwig parish prayers will be at 7:00 PM Wednesday. Arrangements are being made by the Miller-Carlin-Brenny Funeral Home in Holdingford.Teddy was born January 9, 1920 in Holding Township to Peter and Mary (Trutwin) Czech. He worked with the Civilian Conservation Corp in 1939. Teddy married Irene Chromey on June 21, 1950 in St. Francis of Assisi Catholic Church. He was a mail carrier for 8 years and farmed his entire life. He worked for the Soo Line Railroad for over 17 years and he was also a township supervisor for Holding Township for over 47 years. He retired in 1982. He was a member of the Church of All Saints – St. Hedwig and he was a member of the Brotherhood of Maintenance of Way.Teddy is survived by his children; Deborah (John) Binsfeld, Holdingford; Cheryl (Chuck) Barnes, Holdingford; Floyd (Nellie) Czech, Silver Lake; Bonnie (Robert) Soltis, Upsala; Pamela (Donald) Fischer, Albany; Virgil (Sheila) Czech, Holdingford; Loran (Brenda) Czech, Little Falls; Gwen (Al) Seitz, Sauk Center; his brothers and sisters, Marcella (Ed) Hiemenz, St. Augusta; Florence (Victor) Detloff, Melrose; Teckla Scegura, Avon, and Jim Czech, Holdingford. Teddy is also survived by his grandchildren; Greg, Michelle, Tamara, Sheila, Jason, Teddy, Cindy, Brian, Tina, Chad, Curtis, Calvin, Craig, Amy, Peter, Joseph, Amanda, Joanna, Jessica, Jenny and Aaron; his step-grandchildren; Patrick; Ranae; Julia and Thomas; his great-grandchildren; Grant, Keyona, Teddy, Isabella, Christopher, Jazmin, Emma, Ethan, Sarah, Bryce, Evan, Addilyn, Caden, Parker, Preston, Madison, Brady, Nevaeh, William, Wyatt, Ella, Amber, Zoey, Caleb, McCoy.Teddy is preceded in death by his parents, his wife Irene on July 5, 2011, his brothers, Louis Czech, Frank Czech, Nick Czech, Peter Czech; sisters, Helen Czech, Eleanor Heimenz, and Rose Mary Kociemba. He is also preceded in death by his granddaughter, Terri Soltis and great-grandchildren, Ava Fischer and Bentley Nguyen.

There will be a visitation from 4-9:00 PM, Wednesday and again after 10:00 AM Thursday at the church in Holdingford. St. Hedwig parish prayers will be at 7:00 PM Wednesday.

Thinking of you Bonnie, on the death of your Dad. I check the obituaries from the Upsala area once in awhile, and noticed this one for your Dad. Sorry for your loss.