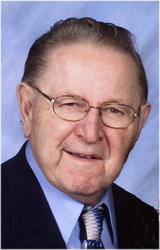 The Mass of Christian Burial, celebrating the life of Theodore “Ted” M. Solarz, age 81 of Holdingford, will be 11:00 AM Saturday, February 16th at All Saints-St. Hedwig’s Catholic Church in Holdingford. Theodore passed away Tuesday at Country Manor in Sartell. Friends may call from 4-8pm on Friday, February 15th at St. Hedwig’s and again from 10AM until the time of the service once again at the church on Saturday.  Parish prayers will take place at 6pm Friday evening at the church.  Arrangements are being made by the Miller-Carlin-Brenny Funeral Home.Ted was born April 27th, 1931 in Holdingford to Zachary and Mary Rose (Kostreba) Solarz. He married Rita Kroll March 1st 1954 at St. Columbkille Catholic Church in St. Wendel. He spent most of his life in Holdingford. He was a lifelong member of St. Hedwig’s Catholic Church where he was an usher for 40 years. He worked at the Holdingford Mill 55 years (truck driver, maintenance and in the mill). He served on the Holdingford City Council for 20 years.Ted is survived by his wife of 59 years, Rita Solarz of Holdingford; his children Gerald (Jan) Solarz, Rice;  Diane (Michael Reget) Solarz, Plymouth; Doris (Roger) Preusser, St. Joseph; Glen (Karen) Solarz, St. Wendel; Donna Mae (Mitchell) Wickstrom, Cambridge; Greg Solarz, St. Wendel; his grandchildren James, Jill, Jennifer, Jeffrey, Jessica, Jenna, Nicole, Ryan, Adam, Sara, Jacob, Joshua, Elizabeth, Rachael; his great-grandchildren Noah, Abigail, Brayden; his brothers, Herman (Karen) Solarz, Holdingford; Clemens (Gail) Solarz, Duluth; his sister-in-laws Esther Solorz, Holdingford; Grace Solarz, Albany; and many nieces and nephews. He is preceded in death by his parents Zachary and Mary Rose Solarz; his grandson Anthony Wickstrom, his infant sister Cecilia, his sister Emily Stodolka, his brothers Theophil Solorz and Felix Solarz, his brother-in-law Clarence Stodolka and his sister-in-law Delores Solarz.A special thank you to the nursing staff at the Sartell Country Manor Health Care Center for their exceptional care.

Friends may call from 4-8pm on Friday, February 15th at St. Hedwigs and again from 10AM until the time of the service once again at the church on Saturday.

Ted Solarz was a person you knew who embodied the term “salt of the earth”. A husband and father, who tirelessly worked to provide for his family. His dedication to his local church where he served as an usher for years, demonstrates his strong belief in Jesus Christ as our Lord and Savior. Let those words be of comfort to Rita, Jerry and all of the family members who mourn his loss. Ted was a person whom anyone would of been proud to call a friend. God Bless Ted Solarz and may he now rest in peace.

My sincerest sympathies in this time of deep grief. May you find comfort with those around you, the photos and memories~

Greg, my thoughts and prayers to you and your family. So sorry to hear of your Father’s passing. Take care.

I am so sorry for your loss. My heart goes out to you and your family.

Rita, Doris and families,
I am so sorry to hear about the passing of your husband/dad recently. This is a difficult time and your heart will be hurting for a long time. Thankfully, you have many family photos and wonderful memories to keep him in your heart forever! God Bless…