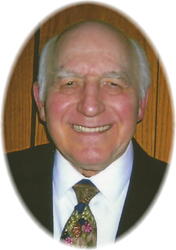 Memorial Services celebrating the life of Theodore “Ted” John Litzner, age 80, of Saint Augusta, will be at 11:00 AM on Monday, September 29, 2014 at the Miller-Carlin Funeral Home in St. Cloud.  Pastor Michael Soppeland will officiate and private burial will take place at a later date.  Ted slept away on September 21st, 2014 at the age of 80 years, 9 months, and 23 days.  Friends and family are invited to a visitation from 10:00 AM until the time of service on Monday at the funeral home.  Arrangements are being made with Miller-Carlin Funeral Home, St. Cloud.

Born November 29th, 1933 to William and Lillian (Schultz) Litzner of Levering, MI, Ted was baptized January 14th, 1934.  He was confirmed May 16th, 1948 at St. Thomas Lutheran Church in Cheboygan, MI.  He graduated from Cheboygan high school in 1952, in Cheboygan, MI.  Ted was united in holy matrimony to Avis (Johnson/Parker) on January 31, 1987.  At this time he became a proud step father to Roxanne and Matthew Parker.  He served in the United States Army from 1953-1955 during the Korean Conflict as a clerk typist.  After the conflict he drove a gasoline truck, was a delivery man, and a handy man. When he moved to MN he worked for Blumburg Communications as an audio visual tech. He retired from this job 1995.  Ted’s service to the Lord included Sunday school superintendant, custodian of St. Thomas Lutheran Church, served on church councils.  He also blessed many with his voice, singing in many church choirs, weddings and funerals.  He was a group and area leader in the mental health field with Recovery Inc. for 25 years.  Ted enjoyed the outdoors, skiing, gardening, singing, visiting and loved his family dearly.

He was preceded in death by his parents, one sister Barbara and her husband Lawrence Nelson, one brother Raymond and his wife Ethel Litzner.

Ted was wonderful Christian man, loved by many and will be greatly missed.

Friends and family are invited to a visitation from 10:00 AM until the time of service on Monday, September 29, 2014.

Oh how I loved the jokes and pranks he would play on us kids.  You have some GREAT company up in Heaven.  I can’t wait to hear that choir.

I will never forget Ted’s wonderful bright smile. Im glad I got the chance to know him. My thoughts and prayers go out to you Avis and your families. My love to you at this time.