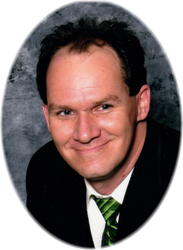 Memorial Services celebrating the life of Steven “Steve” Russell Thompson, age 41, of Hutchinson, will be at 11:00 AM on Thursday, February 21, 2013 at his home in Hutchinson (616 Franklin Street SW).  Steve died unexpectedly at work on Friday afternoon, February 15, 2013.  His friends and family are welcome to arrive after 10:00 AM on Thursday at his home.  Private burial will take place at Oakland Cemetery on a later date.  Arrangements are being made with Miller-Carlin Funeral Home in St. Cloud.Steve was born to Teresa (Hart) Hess on March 29, 1971 while en route to the hospital in Portland, OR.  He grew up in various states and lived an exciting life, fueled by his adventurous spirit.  Steve moved to Minnesota in 2006 as a way to have a fresh start with good friends.  It turned out to be a true blessing.  He met the love of his life, Melissa Bendinelli in Hector, MN, each thinking they were the luckiest.  The two were wed on May 31, 2008 and in 2011 they welcomed their son, Jude Giovanni. Steve loved his family and the friends he made easily.  He was a talented welder, most recently having worked at Warrior for the past two years.  Steve worked hard and he played hard; his laughter will be missed.Steve is survived by his adoring wife of nearly 5 years, Melissa; his mother Terry (Joe) Hess, Yerington, NV; his children Jude, at home in Hutchinson; Terilyn Thompson, Ridgecrest, CA; Jessica Rilling-Thompson, Yerington, NV; his siblings Eric (Heather) Pieper, Kingston, Ontario, Canada; Deanna Brinkley, Oceanside, CA; Scott (Brandi) Thompson, Las Vegas, NV; Joshua (Marissa) Hess, Seattle, WA; Susan (Will) Frey, Winnemucca, NV; his in-laws Starr and Doug Kerr, Hutchinson; Marc Bendinelli and Shannon Vadnie, St. Cloud; Mallie and Andy Dowdell, Litchfield; Shaunna Allen, El Cajon, CA; Scott (Lisa) Kerr, El Cajon, CA; his uncle Mark Forsstron, Yerington, NV; his aunt Lesley O’Hara, Winnepeg, Manitoba, Canada; his nieces and nephews Ryon Bendinelli, Colin and Ryan Heydman, and Sophia Dowdell, Tyler Allen, Taylor Sarris, Dustin and Amanda Kerr, Arianna & Jordyn Brinkley, Drew, Trytan, & Kyndra Thompson, Cosmo Hess, Doug & Ali Pieper; and many friends.

His friends and family are welcome to arrive after 10:00 AM on Thursday at his home.

Some manage to move particles of dust, some are able to move hills, but cousin Steve moved mountains! Hugs to the memories and to the gifts he gave to us. Magical,enthralling,fascinating and missed. Love Cousin Bruce

We are real sorry to hear about your loss and wish all the family our best.

Although we never had the chance to meet this man in person, his effect on those he had contact with is very evident. My wife and myself are saddened over his passing. And we wish Melissa and Jude our most sincere condolences.

I had the privalage and honor of working with Steve and I am lucky to have known him. He will always be missed and never forgotten.