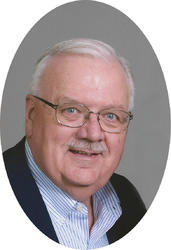 Services celebrating the life of Steven L. Hammer, age 69 of Kimball, will be 11:00 AM, Saturday, October 7 at Christ Church Newman Center in St. Cloud.  Steve died peacefully in his sleep at his home on Sunday.  There will be a visitation from 4-8:00 PM Friday at the Miller-Carlin Funeral Home in St. Cloud and again after 10:00 AM Saturday at the church.  Newman Center parish prayers will be at 7:00PM.

Steve  was born on April 18, 1948 in Detroit Lakes, the first born child of Kenneth and Pearl (Nelson) Hammer.   He graduated from Hutchinson High School in 1966 and St. Cloud State University in 1970 earning a degree in Economics. Steve married Judy Weber on June 17, 1972 in Osseo, MN.  He founded Hammer & Associates, an independent financial planning firm, in 1974. Steve was passionate about the financial services industry. He was involved with multiple professional organizations including NAIFA (National Association of Insurance and Financial advisors) and MDRT (Million Dollar Round Table). Steve loved his chosen profession and looked forward to going to work each and every day.  Steve was an avid outdoorsman who loved to hunt and fish. He was able to share his passion for his hobbies through Focus Outdoors, a television show he hosted and was the president of since 2001. Steve was also actively involved in St. Cloud State athletics, serving as the public address announcer for both men’s basketball and football for more than 30 years. His enthusiasm for his role in the games never faded.  He was a member of the Christ Church, Newman Center.

He was preceded in death by his father, Ken Hammer; and sister-in-law Cathy Hammer.

His larger than life personality and his eternally positive outlook will be greatly missed by all those who knew and loved him.

Memorials will be donated to the organizations Steve was passionate about.

There will be a visitation from 4-8:00 PM Friday at the Miller-Carlin Funeral Home in St. Cloud and again after 10:00 AM Saturday at the church. Newman Center parish prayers will be at 7:00PM.

Memorials will be donated to the organizations Steve was passionate about.

Judy and family~  We are so blessed to have gotten to know Steve this last year.   Steve always had a twinkle in his eye and a smile on his face whenever we were together and was a great story teller.  Our hearts are heavy for all of you.  We hope that your memories and the love you shared will bring healing to all of you.  With heartfelt sympathy,  Tom and Mary

This is unbelievable.  He looked tired, when I left Friday nite.  But, what a shock!!

Really going to miss his booming voice and larger than life presence.

Sincerely at a loss;

I can’t believe this.  So unreal.  The Lord must need a great PA announcer in heaven.  I know I’ll sure miss him!  All my love to all of you. May the Lord give you strength.Oaks

It was so sad when I heard that Steve had passed away.  I worked with him on many occasions regarding NALU (that is what they called it then) events, especially Mark Johnson’s trustee and presidential campaigns.  Steve was our logistical manager and took that on with the same enthusiasm he did everything else.  Whenever I got a chance to visit St. Cloud, Steve and I would have lunch and just visit.  I know he was passionate about his business, the outdoors, and St. Cloud State sports.  But he was the most passionate about his family.  I am going to miss Steve and your entire family is in our thoughts and prayers.  God bless Steve and your family.

Steve will be deeply missed by many, our NAIFA organization is far better because of him.  As a friend I send my heartfelt sympathy to you his family.

Many great memories fishing with Steve he will be missed! Rest in Peace

I’ve gotten to know Steve over the last several years through NAIFA and Day with MDRT.  His passion, energy and enthusiasm for seemingly everything he did will be sorely missed. He was a wonderful man. May God Bless the Hammer family at this difficult time.  My very best to you all.

Judy and family,
I was so shocked and saddened to hear from Linda, about Steve’s passing. You have my heartfelt sympathy. He was my first sales manager, and taught me so much about sales, people, and perseverance, but most of all, always thinking about the positive side of everything. He was almost relentless in that! God bless him and may he rest in peace.
Sincerely,
Kathleen McDonald Croaker