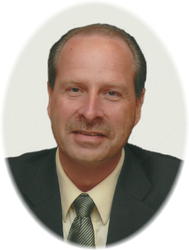 The Mass of Christian Burial, celebrating the life of Scott A. Munter, age 44 of St Cloud will be at 10:30AM Saturday, April 17 at St Joseph’s Catholic Church in Waite Park.  Burial will in the Saints Peter and Paul Cemetery in Richmond following the service.   Scott died peacefully in his home of ALS (Lou Gehrig’s Disease) surrounded by family on Wednesday.  There will be a visitation at the Miller-Carlin Funeral Home on Friday from 4:00PM to 8:00PM, and again at the church one hour prior to the service on Saturday.Scott was born on July 4, 1965, in Braham, MN to Richard and Janice (Kubat) Munter.  He graduated from Mora High School in 1983.  He graduated from the St Cloud Technical College in 1985.  He was employed at Cold Spring Granite Company for 24 years.  He married Margaret Gertken on May 4, 1991, in Saints Peter and Paul Catholic Church in Richmond.  They had two children, Rachel and Ryan.Scott was a member of St Joseph’s Church, Waite Park.  Before being diagnosed with ALS, Scott was active in his church and his children’s school.  He served on the Board of Education, Finance Committee, and was an usher.  He was a volunteer coach for Cold Spring Youth Hockey for several years.  He enjoyed golfing, biking, and hockey.He is survived by his wife, Margaret, and his children Rachel and Ryan, St Cloud;  his parents Richard and Janice Munter, Mora;  his sister Terry (Jon) Price, Mora; brothers Mike Munter, New Jersey; and Steve (Denise) Munter, Waconia, his nephews Matt (Meghann, Dane) Price, Oliver Munter, and niece Kristen Munter.  He is also survived by his brothers and sisters-in-law, Bob (Suellen) Gertken their children Isaac and Johnna, and Eileen (Rick) Buerman and their children Kristen and Dan.He was preceded in death by his grandparents, his mother and father-in-law Mel and Thar Gertken, his brother-in-law John Gertken, and his uncles Ron Goldsmith, Glen Erickson, Doug Kubat, and Junior Peterson.In lieu of flowers, memorials are preferred.  Donations in Scott’s memory will be made to the ALS Association, St Joseph’s School, and Cathedral High School.

There will be a visitation at the Miller-Carlin Funeral Home on Friday the 16th from 4:00PM to 8:00PM, and again at the church one hour prior to the service on Saturday the 17th.

In lieu of flowers, memorials are preferred. Donations in Scotts memory will be made to the ALS Association, St Josephs School, and Cathedral High School.

Keeping you and your entire family in my thoughts and prayers during this difficult time. God bless!!

Margi and family, Bob and Sue, I am so sorry to hear of Scott’s passing. I just learned of his illness the other day. I could be politially correct, but you know me…this just plain sucks. God bless you all, you are in my prayers. He will always be with you!

Please know that your family is in our prayers. Even though we know each other only through St. Joseph’s Church, I know that Scott was a loving father. Prior to his illness, he was so involved in our church. No matter what he did, he did it well. Remember the good times you had with him. Rachel and Ryan, you are both so young, but every time you see a star in the sky that will be your dad looking down on you reminding you that he will be with you always. Marsha, Doug & Geoffrey Bible

Our Deepest Sympathy. Scott was a wonderful person. He will be missed. Our thoughts & prayers are will all of you.

Margi and family,
My deepest sympathy to you at this difficult time. You will stay in my thoguhts and prayers.

First and foremost; our family would like to extend our hearfelt sympathy towards Scott’s family. I was lucky enough to know Scott as a result of growing up so close to his wife’s family. I think the thing I remember most about him is his great humor and unbelieveable wit – he always made me laugh at something. I was honored to be a part of his wedding to Marge. Lastly, I’d like to compliment Scott on his greatest accomplishment during his time with us – the wonderful family he’s created. We’ll miss him, remeber him and look forward to seeing him again one day!

Scott was my birthday buddy as we grew up. It has been far too long since those days as kids, and even too long since we had been able to share other holidays, but I can still picture those good times and he will be missed.

Margi and family,
My deepest sympathy and my prayers to you and the kids. Although I left Minnesota over 20 years ago some of my fondest memories of my time there was working with Scott. He was a true friend and we shared many laughs. As you read this and the other notes that are posted here I hope that it confirms what you already know…. That Scott was a great man and made an impact in so many peoples lives. I will miss him.

I am so deeply sorry for your loss. I wish I could be with you but living in Georgia makes it impossible for me to get there. I know what a wonderful husband and father Scott was and want you to know that I’m sending healing thoughts to you and your family. You are constantly in my thoughts.

To all of Scott’s family-
I’m so very sorry for your loss. I met Scott a couple times, but knew him mostly through stories that Johnna has told me about his sense of humor and positive outlook on life. I know that he will be greatly missed by everyone who had the pleasure of knowing him. You’re all so blessed to have such a close family to support one another at this time. I will continue to keep each one of you in my thoughts and prayers.

I’m so sorry to hear of your loss. Scott was so much fun to have at the Muscular Dystrophy Association’s ALS Lock Up last year and it was always so wonderful to see him at the MDA ALS clinic.
Please pass on my condolences to Rachel and Ryan. Please know that they are always welcome at the MDA ALS Youth Support Group.
Please let me know if there is anything I or the MDA can do for you and your family.
Tiffany

I am so very sorry to hear of Scott’s death. My heart truly goes out to you and your children. You have all been through so much. May you find peace and comfort from the support of family and friends in the difficult times ahead. My thoughts and prayers are with you.

We are so sorry for your loss. Our thoughts and prayers are with you in your time of sorrow. You have our deepest sympathy.

Scott was one of those guys you couldn’t help but like. He lit up every room he walked in to with his charm. I had the pleasure of working with Scott for 2 1/2 years and will never forget him. He lived for his family! He absolutely adored his wife and children and just made you want to be a better person all around. He will be greatly missed!

Margi you are blessed to have been married to such a wonderful man who touched so many people’s lives. I commend you for your strength and everything you went through to help Scott deal with this horrible disease…you were definitely his rock.

Rachel and Ryan, my heart goes out to you both as I can’t imagine what you’re going through, but you must know that your father was one of the best men I’ve ever known.

My thoughts and prayers go out to you all. God Bless

To Margi and family;

I am deeply saddened to hear of Scott’s passing. I hung out a lot with him in my senior year in high school, and the joke he made in Mr. Sandy’s accounting class is still something of a legend to the Class of ‘83. I will miss him.

My thoughts and prayers are with you.